“Thanks for ending this year with a win”- Twitter reacts as resilient Ravichandran Ashwin, Shreyas Iyer save India from falling apart

India would have lost the second Test against Bangladesh had not Shreyas Iyer and Ravichandran Ashwin stayed glued to the crease when India were reeling at 74/7. 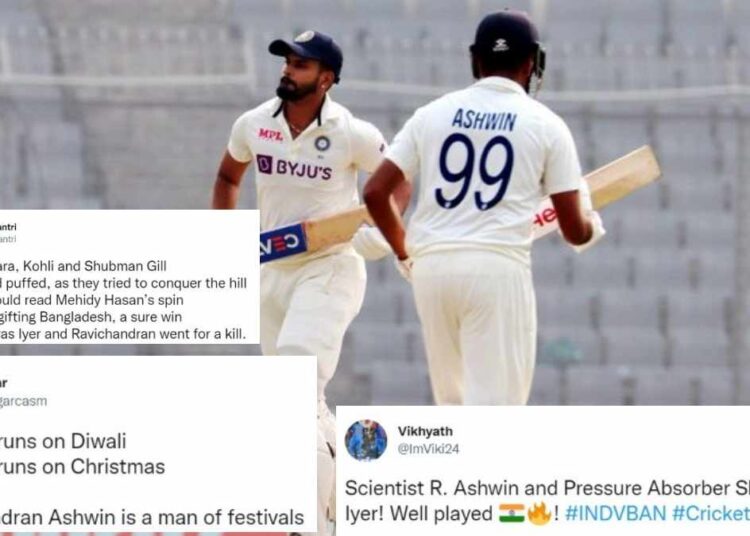 India would have lost the second Test against Bangladesh had not Shreyas Iyer and Ravichandran Ashwin stayed glued to the crease when India were reeling at 74/7. Their resilient knocks saved the team from falling apart as India whitewashed Bangladesh by 2-0. India won the 2nd Test by three wickets at the Sher-e-Bangla stadium in Dhaka on Sunday (December 25, 2022).

Chasing 145, Indian batsmen were held back by Mehidy Hasan’s fifer. The pair of Mehidy and skipper Shakib Al Hasan got rid of the top-three batters, all heading to the pavilion for single-digit runs. Virat Kohli and Jaydev Unadkat failed to produce much and it was expected of Rishabh Pant to play a quick knock, putting India in a better position but all he contributed was nine runs.

All-rounder Axar Patel tried to stabilize the innings, scoring 34 off 69 balls, including four boundaries. But after his dismissal on Day 4, the responsibility fell onto the shoulders of Iyer and Ashwin. Bangladesh knew they were inching toward a victory.

But Iyer and Ashwin had other things on their mind. They batted carefully but occasionally attempted for a big shots. But in a nick of time, Ashwin and Iyer got closer to the target and chased away without losing another wicket. Iyer scored an unbeaten 29 runs off 46 balls, while Ashwin played a 62-ball 42-run knock with four boundaries and one maximum.

Now Ashwin has 3000-plus runs and over 400 wickets is Test cricket before playing the 100th match of his career. He is also the second quickest all-rounder to achieve this feat. Former New Zealand all-rounder Sir Richard Hadlee, who took 83 Test matches (five less than Ashwin), tops the list.

India won the first Test by 188 runs with the help of Kuldeep Yadav’s eight wickets. India stand second on the list of the ICC World Test Championship. They will now play two-match Test series against Australia from February 14, 2023.

Twitteratis are celebrating India’s win, congratulating the knocks played by Ravichandran Ashwin and Shreyas Iyer. They have also come up with hilarious memes to mock India’s terrible condition when they were losing quick wickets to chase away a small 145-run target. Check their reactions:

ALSO READ | “I thought of packing bags and going home from CSK camp,” N Jagadeesan opens up about his low days