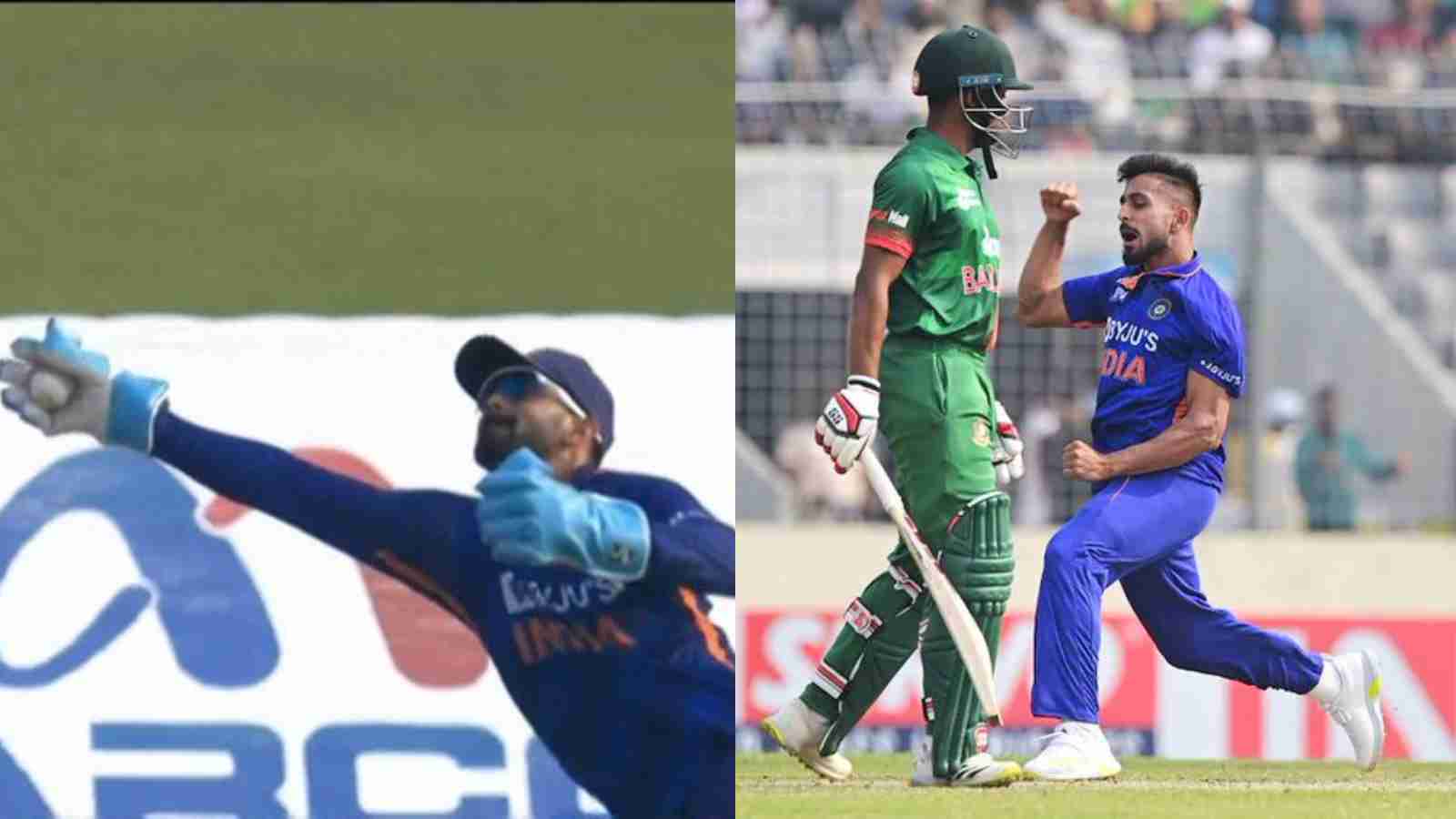 Team India vice-captain KL Rahul grabbed a one-handed stunner to send Mahmudullah to the pavilion from speedster Umran Malik‘s delivery in the second ODI on Wednesday (December 7) at the Sher-e-Bangla stadium in Mirpur. Malik was in ecstasy and gave the batter a send-off.

This happened when Malik broke the frustrating partnership between Mahmudullah and Mehidy Hasan. Mahmudullah cut the back-of-the-length delivery, but Rahul from behind the stumps grabbed a one-handed catch.

Both the batters rescued their team when they were tottering at 69/6 and stitched a 148-run partnership. While Mahmudullah played a slow but effective 77-run off 73 balls, Mehidy went on to complete his maiden ton in ODI off 83 balls. His knock drove his team to 271/6 in their allotted 50 overs.

During India’s chase, Shreyas Iyer (82 off 102 balls) and Axar Patel (56 off 56 balls) recovered India’s innings with their respective half-century knocks. Still, India had rather a long way to go to tie the series. Then entered skipper Rohit Sharma at No.8, and with an injured thumb, led an onslaught from the word go by smashing five maximums and three fours, scoring unbeaten 51 runs from 28 balls to revive India’s hopes. But ultimately India fell short of just six from one ball and Bangladesh secured the series by 2-0.

Former India pacer Ajit Agarkar has lauded Umran Malik for disturbing Bangladesh pro-all-rounder Shakib Al Hasan in his first over. He also praised Malik for his dismissing Najmul Hossain Shanto in his next over.

“I think his role and how the captain uses him will be important because at the start it was hostile to Shakib and he didn’t enjoy it. Later on, he moved away from the stumps and swung,” Agarkar said during the post-match discussion on Sony Sports when asked about Mailk’s spell.

“When you see that, basically you know you have entered the batter’s mind. That over was good but the follow-up, the first ball of the next over to Shanto, is a good sign for a young bowler,” he added.

ALSO READ | WATCH: Mohammed Siraj walks up to Najmul Shanto to sledge him; Shanto gives a befitting reply with a boundary

by Sumedh Joshi
No Result
View All Result