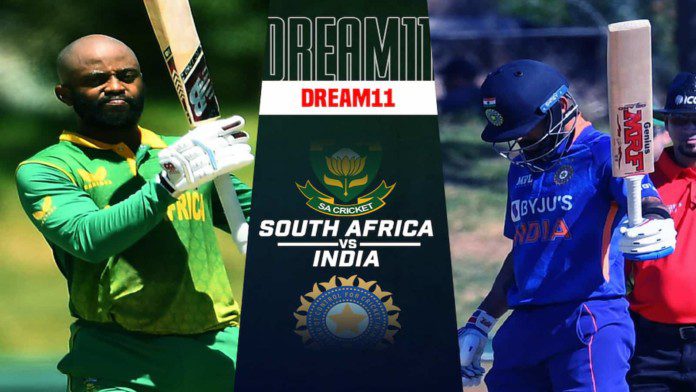 The second match of the SA vs IND series will be played on Friday 21st January at Boland Park, Paarl. South Africa won the first match by 31 runs after India’s middle-order struggled to go past Proteas’ total of 296 runs. The South African batters, Temba Bavuma and Rassie van der Dussen scored 110 and 129 runs respectively, and added 204 runs for the fourth wicket. This partnership was the game-changer as the wicket was slow, therefore anything above 250 was a challenging score.

For India, Shikhar Dhawan and Virat Kohli had a partnership of 92 runs for the second wicket. Dhawan made 79 runs off 84 before getting dismissed. Kohli scored 51 runs off 63 balls and again missed the milestone of the century. India lost five wickets for just 62 runs after Kohli’s dismissal. Shardul Thakur made 50 runs off 43 balls but failed to complete the task. India will be looking to make some changes to the XI and make a comeback in the series.

In the first game, the wicket was on the slower side. However, both the batters and the bowlers got enough opportunity and the same might be the case for this game. The pitch is expected to remain neutral throughout the match. The team batting first will be looking to score 270+.

Conditions will be hot and blazing throughout the SA vs IND contest. The temperature will be hovering around 38-42 degrees Celsius. There will be no interruptions in the game as the weather will remain clear.

Shikhar Dhawan played his first ODI since July last year in the previous match. He provided India a great start with the bat. Dhawan made 79 runs off 84 balls and looked really sharp.

Rassie van der Dussen was playing against India for the second time in the last game. He managed to score the second century of his ODI career. He played an attacking knock of 129 not out in the first match and guided his team to a total of 296 runs.

Jasprit Bumrah picked two wickets in ten overs during the last match while giving away just 48 runs. Bumrah dismissed Janneman Malan and Bavuma in the last match and it was his first wicket in the powerplay in ODIs since July 2019.

Temba Bavuma made the second ton of his ODI career against India in the previous match. He played a captain’s knock of 110 runs off 143 balls and along with van der Dussen played a key role for the Proteas.

Probable XI for SA vs IND

Looking at the current form and team combination, India is expected to win this game and make a comeback in the series. However, South Africa has to work really hard if they want to continue their winning form and clinch the series.