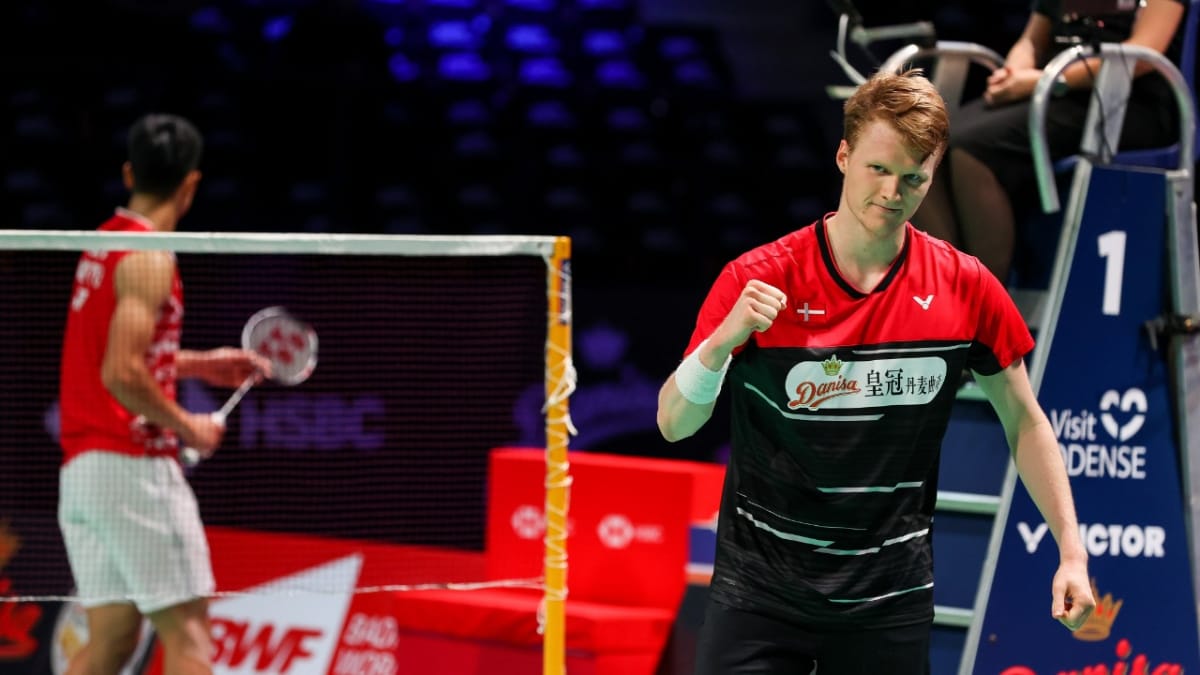 It was the 2nd ever all Danish final at the Danisa Denmark Open at Odense since the inception of World Tour and Superseries format. Anders Antonsen faced Rasmus Gemke in the men’s singles final. Both the players, Danish youngsters are 23 years of age. Quite young finalists they were, competing at the final of their home event.

The youngsters assured their home country of a first men’s singles title since 2010. Jan O Jorgensen had last won it in that year. The host country was also assured of its first title in four years since mixed pair Joachim Fischer Nielsen/Christinna Pedersen won in 2016.

The last all-Danish men’s singles final was last contested in 2008, and won by Peter Gade against Joachim Persson.

Antonsen led the head-to-head 3-0 against Rasmus Gemke. However, the lower-ranked Gemke took away the closely fought first game 21-18. Both players were really working every rally, playing thoughtful shots and attacking with precise placement and angles. The game had several beautiful cross-court smashes. In the mid-game-interval of the second game the world no 3, Antonsen had a lead of 2 points. The rallies were filled with brilliant, unpredictable, extraordinary shots! The youngsters just took the game a notch higher. With a few errors coming from Anders, Rasmus came back and took the lead 17-16. The match soon was nail-biting as Rasmus caught up making the scores level at 19-19. Anders went to game point opportunities and Rasmus pushed the shuttle long. He then won the game 21-19.

Antonsen stormed into the lead in the decider, 10-5, demolishing his compatriot. There was no stopping Antonsen with his thunderous smashes. The world number 3 seemed to show why he is better as he widened the gap in the score 19-10. He won the game 21-12, making him the first Danish in 10 years to win the home title.

The men’s doubles finals were contested by Marcus Ellis/Chris Langridge of England and Vladimir Ivanov and Ivan Sozonov of Russia. The English pair started off very well with their attack and placement going into a lead of 10-4. The Russians gradually found a rhythm and went on narrowing the gap. The Russians pair with such great advantage of height from the tall Ivanov upped their ante in their attack. The game then went neck to next, ending 22-20 in the favour of the Russian pair.

For the first time in the match the Russians took a huge lead in the first half of a game 8-3. Their attack was thunderous with Ivanov raining down Smashes from the rear court. Ellis and Chris seemed to be getting points when the played close to the net and not lifting the shuttle. They came back level at 9-9. The English pair displayed some phenomenal defence against Ivanov’s attack. The Olympic bronze medallists Chris and Marcus went into the mid-game break at 11-10.

The second seeds Langridge and Ellis took a lead of 17-14. Soon, at 20-18 despite the opponents coming close, the Englishmen closed the game with their smash being returned into the net.

Marcus Ellis and Chris Langridge became the first English pair in 45 years to win the men’s doubles title at the Denmark Open.

The English husband-wife pair of Chris and Gabrielle Adcock won the opening game 21-18 against the German pair. Mark Lamsfuss and Isabel Herttrich played surprisingly well and took away the second set 21-11. The took lead in the third game as well. They took the English pair by surprise and stormed through to match point and won it 21-14. It was a historic win as no German had won a title at such a high level.