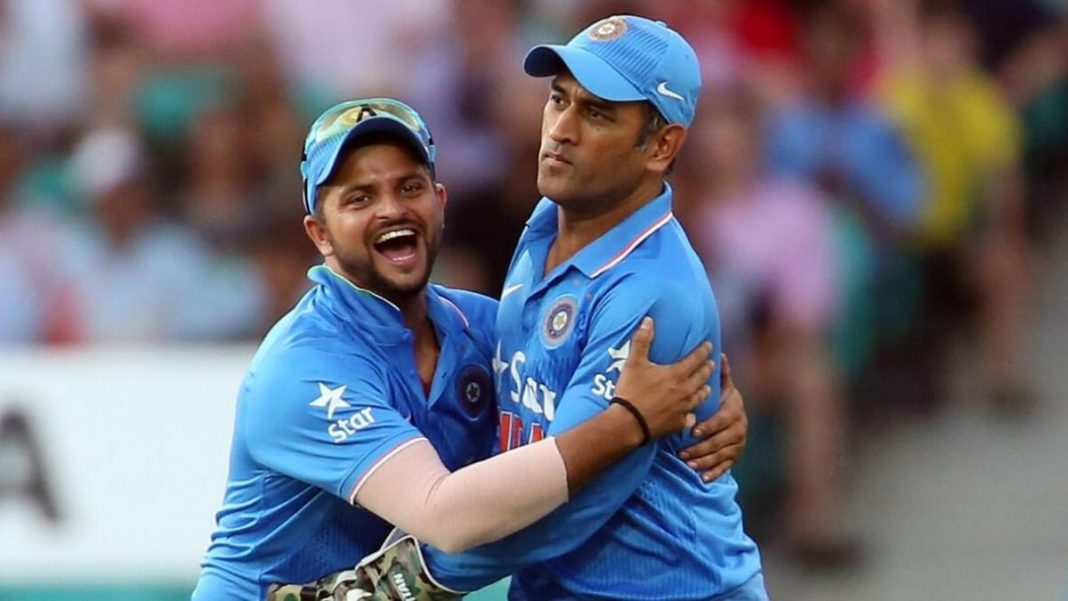 Both MS Dhoni and Suresh Raina announced their retirement on Independence Day. For 90s and 2000s Indian kids, these two along with Yuvraj Singh and Virat Kohli symbolized grit, solidity and flair in the LOI middle order. As long as ‘Captain Cool MS Dhoni and late order specialist Raina were undismissed, no target was out of reach

Today we relive the 5 best Dhoni-Raina partnerships for India.

Chasing a total of 231 runs in the 2nd ODI of the India-England series, India were reeling at 92-5. All the top order batsmen including Sehwag, Dravid and Yuvraj were back in the pavilion.

Out walked India’s young wicket-keeper batsman, MS Dhoni, after the fall of Yuvi’s wicket. Giving him company was another youngster Suresh Raina. Raina was the leader in the partnership, scoring 1s and 2s and boundaries off bad balls. Dhoni played the anchor role. Together they stitched a 118-run partnership for the 6th wicket. By the time Dhoni was dismissed for 38, India’s score read 210-6 and they were well on their way to victory. Raina won man-of-the-match for his unbeaten 81 off 89 balls.

The last cricket series India played in Pakistan was the 2008 Asia Cup. Raina was making an international comeback after almost 2 years while Dhoni was captaining his first Asian tournament. India played their first match of the Asia cup vs minnows Hong Kong. Although the opposition was easy, both Dhoni and Raina had a point to prove.

Winning the toss after electing to bat first, India were put to a good start by openers Sehwag and Gambhir. After Rohit Sharma’s dismissal and India at 159-3, the onus was on Dhoni and Raina to take India to an unbeatable total. Their 166-run partnership became the highest 4th-wicket partnership at Karachi. Raina was the more aggressive of the two, posting 101 off just 68 balls including 5 sixes which was his first ODI century. Dhoni scored 109 off 96 with 6 sixes.

India scored a massive 374-4. In reply Hong Kong were dismissed for just 118. Raina was the MOM, making a comeback in style.

India elected to bat first after skipper Dhoni won the toss in the 2nd ODI of the India-Australia ODI series. Dhoni and Gambhir set a good platform for India. By the time Gambhir was run-out for 76 in the 34th over, India were 216-4.

Out walked Raina and he and Dhoni set up a blistering partnership of 136 runs for the 5th wicket. Both were dismissed in the final over, but not before making sure India reach a daunting total of 354-7. This was at that time the highest first innings score against the Aussies and the highest score batting first against them by any team. Dhoni scored 124 off 107 including 9 fours and 3 sixes while Raina hit a blazing 62 off 50. India won the match by 99 runs. Dhoni was MOM for his century. It was the highest ODI score by a captain against Australia.

India were coming off a disastrous Test series vs England. In the ODI series, the 4th ODI was the only match of the tour where India was not beaten. Much of the credit goes to the Dhoni-Raina partnership of 169 for the 5th wicket. Having been put in to bat by England, India were 110-4 after 26 overs after Dravid’s dismissal.

Contrary to the rest of the series, however, captain Dhoni combined well with Raina to make sure India reach a challenging total of 280-5. Raina scored 84 off 75 while Dhoni hit an unbeaten 78 off 71 against an attack of Anderson, Broad, and Swann. Their partnership still remains the highest ODI 5th wicket partnership at the hallowed Lord’s.

Although the match was eventually tied due to Duckworth- Lewis rules, Raina won MOM along with England’s Ravi Bopara.

Defending champions India were one of the favourites for World Cup 2015. And they sure did live up to the tag in the group stages. After winning 5 group games in a row, they faced Zimbabwe in their final group game before the quarters. Though India were expected to steamroll their opponents, Zimbabwe posted a competitive total of 287 thanks to Brendan Taylor’s 138. In reply India were struggling at 92-4, with chase master Kohli back in the pavilion.

Out walked in skipper MS Dhoni. He and Raina set up an unbeaten 196-run partnership and took India home with 1.2 overs to spare. Raina hit 110 off 104 balls, his first and only World Cup century. Dhoni scored 85 off 76. The positive batting by these two, including 6 sixes in total, obliterated any hopes Zimbabwe had of an upset win.

India were set for the QFs. Raina got MOM for what would turn out to be his final one-day hundred.