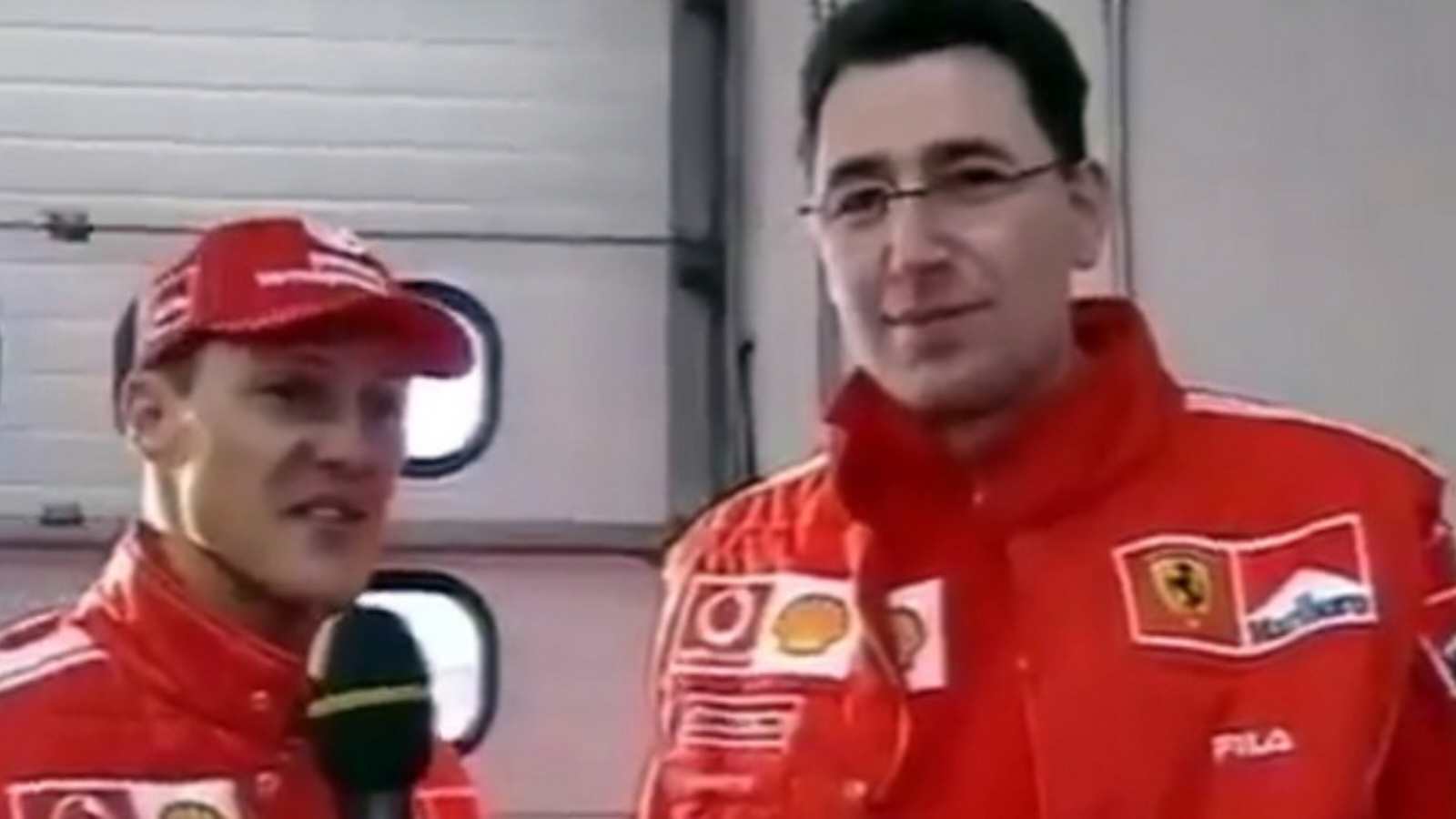 Mattia Binotto is interviewed by Michael Schumacher in 2004

Mattia Binotto has officially resigned from Scuderia Ferrari. The 53-year-old will no longer be the team principal at the most successful team in Formula 1. Binotto has had a longstanding connection with the Italian squad, with key contributions on the engine and technical aspects which led to the team’s success in F1 in the early 2000s with legendary Michael Schumacher. As the Italian finally departs as Team Principal, we take a look back at a clip from that time.

During the 2004 French Grand Prix, Schumacher was conducting the ‘Meet the Team’ segment and the 7-time world champion then introduced the viewers to a young Binotto. The German called the Italian engineer, “the third important guy” on the team. Schumacher referred to the 53-year-old as, “the piece between the rear wing and the driver, the engine and that’s Mr. Binotto.” The Ferrari driver then went to inform the viewers about Binotto’s role in the team, he stated, “he’s the engine engineer, and now the sort of head of the group of engines.”

When asked about his work during a race weekend, Mattia Binotto replied cheerfully in Italian and said, “During a race weekend I was working on reliability, and ensuring that the engine worked properly on Michael’s car.” The young head of race engines elaborated on the team’s aim of achieving optimal performance without sacrificing reliability while also mentioning the crucial role played by Schumacher’s involvement in providing feedback. Binotto continued, “In order to get absolute reliability and the best performance from the engine it is important that we talk with Michael to get his feedback in order to achieve this.

The German driver concluded the interview by thanking his team member. This instance shows the good relations enjoyed by Binotto and Schumacher which resulted in the team’s utter dominance on the F1 grid. 18 years since, times have changed for the 53-year-old and the Italian squad, which has only seen one drivers’ championship victory after 2004. However, the video must be one of the memories cherished by Binotto.

Mattia Binotto gave his resignation as team boss of the Italian team, after 4 seasons of leadership. At this time, the Scuderia went through a couple of troublesome years, due to the controversy surrounding the legality of its engine. Although it was the 53-year-old who led the team to its resurrection as a fighting force in F1, it finally got back to competing for wins and achieving pole positions. Binotto also developed a new culture in the team, where there was no blame game or use of scapegoats, instead, the team boss accepted the responsibility for all the team’s shortcomings.

Previously there were rumors about Binotto being forced out of Ferrari due to the failure of winning the championship, however, the team issued a statement on 15th November 2022, refuting those rumors. 2 weeks since, the 53-year-old has announced his departure from the team.

The departure of Binotto will put Scuderia Ferrari into a new phase in F1 as it hires a new leader to run the team, allegedly expected to be the current Alfa Romeo Team Principal Frederic Vasseur. It will be interesting to see how things shake up at Maranello for the 2023 Formula 1 season.