Ayrton Senna's domination in F1 was brought to notice to drivers with printed sheets, listing the timing of the entire grid. 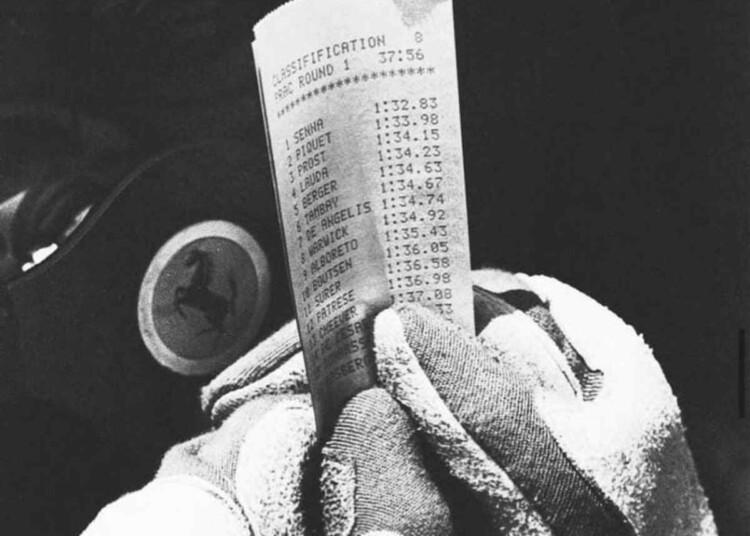 A Qualifying timing sheet with Ayrton Senna at first place

Ayrton Senna was a magnificent F1 driver. Senna truly transformed Formula 1 and showed the world what real talent is. Ayrton is widely regarded as an all-time great of the sport. Experts are certain that the Brazilian had a lot more to achieve in his staggering career. Only if Senna did not have that fatal crash at Imola in 1994. The Brazilian driver is still looked up to as an inspiration by drivers and fans alike.

The 1985 F1 season truly brought Ayrton Senna’s talent to the notice of the paddock. Ayrton secured his first pole position and won his first race at the Portuguese Grand Prix that year. Although, there is a picture that speaks more than a thousand words about the Brazilian’s pace. A photo surfaced online recently, one which depicts a printed sheet in the hands of an F1 driver. The timing sheet from the first qualifying session from a Grand Prix.

The image appears to be from the 1985 French Grand Prix, held at Circuit Paul Ricard. During the first session in Qualifying, Ayrton Senna truly annihilated the competition. Senna clocked in a time of 1.32.83, over a second faster than second-placed, Nelson Piquet with a 1:33.98. This gap is enormous even today let alone almost 40 years ago. Hence, it takes no expert to figure out how fast Senna was in Formula 1. No wonder someone like Lewis Hamilton still remembers Senna as his idol.

Also Read: “S*x, breakfast of champions,” the story behind the iconic logo of the F1 legend James Hunt

F1 drivers were given such printed sheets in the old days

Formula 1 has evolved over the years. The sport is often regarded as the peak of innovation in the auto industry. Thus, it may come as a shock to see a piece of paper in the hands of an F1 driver. But that indeed is the case, decades ago during Ayrton Senna‘s journey in F1, this was the system that teams used to inform their drivers regarding the pecking order. Certainly, a method that seems antique in today’s day and age. Although, holding a physical copy of the results can surely have an impact on drivers.

Perhaps that impact was the case in 1985 when the Ferrari driver in this image got this timing sheet. Albeit it cannot be confirmed if the driver is Michele Alboreto or Stefan Johansson. However, in any case, a driver will be psychologically on the backfoot when they get to know that their rival is over a second faster than the entire grid. That too when it was just the first qualifying session. Ayrton Senna truly was a league ahead of the rest of the field.

Unfortunately, Ayrton Senna failed to build on this impressive lap time. The Brazilian driver lost the pole position to Keke Rosberg by three-tenths of a second. Keke also went on to win the race. However, Senna’s impressive lap was a sign of what was to come as the then-Lotus driver went on to create history in F1. Giving the fans some of the most iconic races and rivalries in the sport, along with winning three world titles. Truly, the world lost this legend too soon.

Read More: The Formula 1 Drivers with the most Grand Prix wins in wet weather

Read More: The list of the highest average grid positions in Formula 1 provides a new picture to the sport