Valtteri Bottas ended his five-year spell at Mercedes at the Abu Dhabi GP last year, as the Finnish driver moves to Alfa Romeo in 2022. Bottas had a successful time at the Silver Arrows, winning five consecutive constructors championships.

Although, Bottas could not achieve his personal ambition of winning the title, yet he was always there for his team. The Finnish driver won 10 races in 5 seasons, and never failed to make it to Q3. Sebastian Vettel, four-time world champion is unhappy to see Bottas leave Mercedes, because of the great person he is on and off the track.

Personally, it was quite a difficult year for Sebastian Vettel as well, who joined Aston Martin Racing. The German made his switch from Ferrari in 2021, after a six-year spell with the Italian giants. With newer regulations coming in place from this year, Vettel will surely look to perform much better given he gets provided with a good overall package.

Sebastian Vettel heaped praise on Valtteri Bottas for being a great driver, and above all, a good person off the tracks. The German believes that Bottas is one of the fastest drivers on the grid, and a move to Alfa Romeo will certainly help his case.

“Somehow I think it’s a shame that he has to leave Mercedes,” Vettel said to Blick.

“But maybe the new regulations for the Swiss team in 2022 will suit him, so that things will finally be more balanced in the field and he will have more chances. Valtteri is one of the most straightforward and honest drivers. And above all, Bottas is also one of the fastest drivers in the field,” he added.

Sebastian Vettel believes that Valtteri Bottas can be much more of a leader at Alfa Romeo, as compared to at Mercedes. Vettel added that it was not easy for the Finnish driver to be alongside someone like Lewis Hamilton at Mercedes.

“I’m just happy that he can play a much more central role there than before,” Vettel added.

“Bottas certainly didn’t always have it easy in the five years alongside Hamilton. But I’m also sure that he was always treated fairly at Mercedes,” he added. 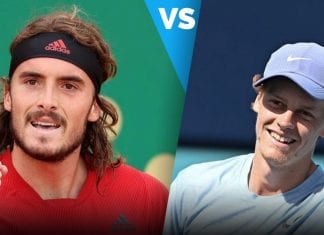 Drishti Geete - January 26, 2022
Stefanos Tsitsipas is a Greek professional tennis player. His current ranking according to the ATP is World No.4 and his highest ranking was World...