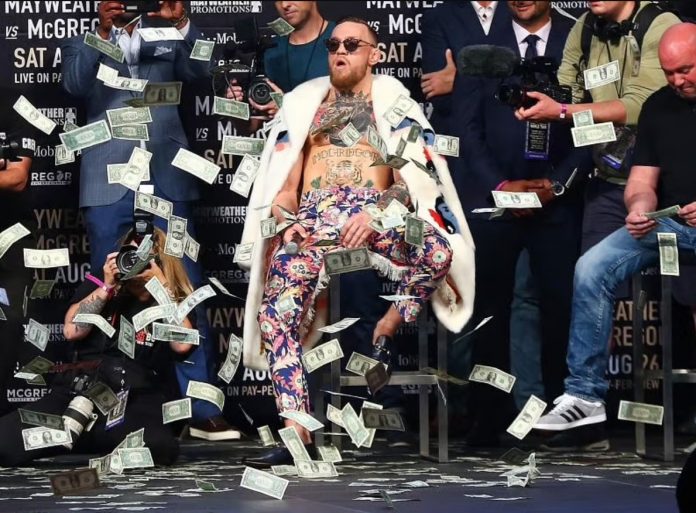 Conor Mcgregor net worth has seen a steady increase over the years despite featuring in only 4 fights since the beginning of 2017. Any event he features in, he gets paid in chunks, irrespective of the result. Conor McGregor – arguably the most popular mixed martial artist the world has ever seen, lives like a king. The ‘face of the fight game’s’ charisma and aura, coupled with his immaculate talent inside the ring, has helped him develop his brand.

If anyone from MMA can come closer to challenging the riches of athletes like Cristiano Ronaldo, LeBron James, Floyd Mayweather, Lionel Messi; it has to be Conor McGregor. With an astounding net worth of 120 Million US dollars, here’s a look at how ‘Mystic Mac’ grew his net worth.

Conor has endorsement deals with top brands like Beats by Dr.Dre, Monster Energy, Burger King, Reebok, Electronic Arts and Budlight. The endorsement deal with Reebok alone, earns him a staggering 5 million dollar a year. Besides that, he ventured into the fashion industry, prior to his boxing debut against Floyd Mayweather; partnering alongside tailoring brand David August, launching August McGregor suits. He also has his own whisky, called the Proper No. Twelve, named after the neighbourhood in which he grew up – Dublin 12.

Conor Mcgregor net worth goes up with each PPV and paycheck

Conor McGregor holds properties of multi million dollar in various countries of the world. The main house of Conor is in Dublin, Ireland that has five bedrooms, six bathrooms, living room and games room. He also purchased one house in Marbella, Spain that is his holiday house and there he has a customized gym and home spa with a large swimming pool.

One of his house is also in Las Vegas where the headquarter of UFC is located. This one has an infinity swimming pool and seven bedrooms. From here you can see Conor McGregor has invested heavily in the property.

The Notorious is an avid car and watch collector!

Q. What is Conor McGregor’s salary?

‘The Notorious’ received a payment of $3.04 Million from UFC for his last fight against Dustin Poirier at UFC 257.

Q. How much money does Conor McGregor have?

Conor’s net worth was estimated around $200 Million.

Q. What is Conor McGregor’s ranking in Forbes’s highest-paid athlete list of 2021?

Conor topped the list of world’s highest paid athlete of 2021 by whooping amount of $180 Million.

Q. Is Conor richer than Dana?

No, Conor isn’t richer than Dana. In 2021, Dana White’s net worth is reported to be around $500 Million while the Irish superstar Conor McGregor stands somewhere around $200 Million.

Visruta Aiyer - June 15, 2021
It is a sad day for badminton as the Indonesian badminton player, Markis Kido, passed away at the age of 36. Kido, who was...