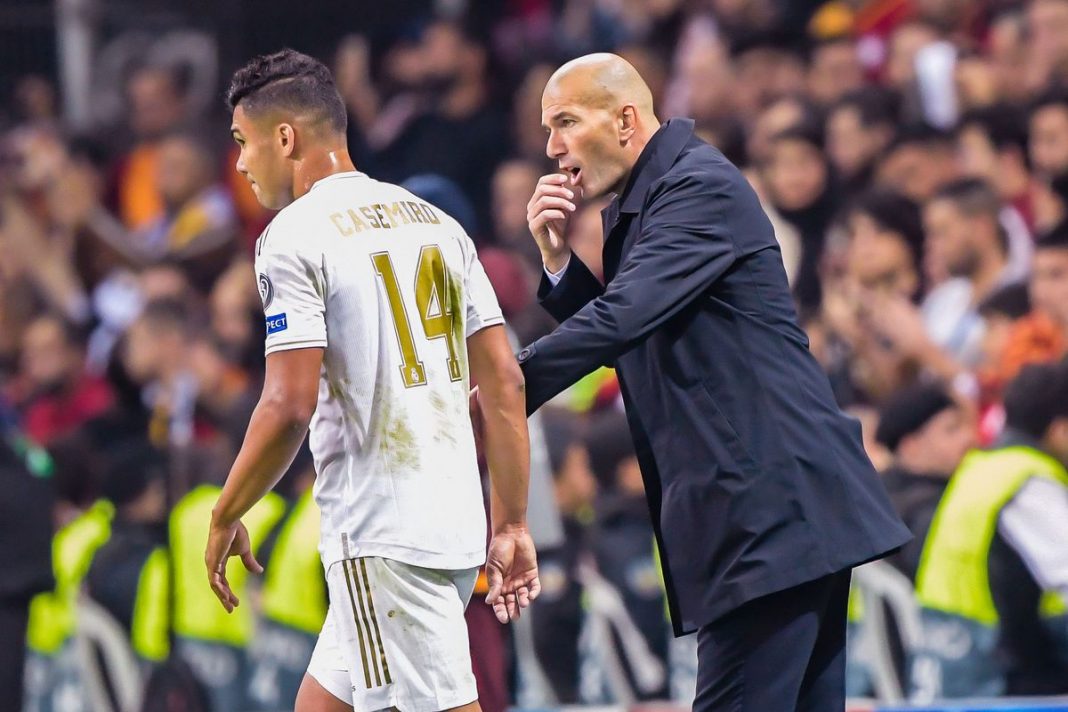 Casemiro recently admitted that he still gets nervous talking to Real Madrid’s manager Zinedine Zidane. Although Casemiro has been a part of the “Los Blancos” since 2013, But the Brazilian midfielder cemented his place in the club under Zidane.

Casemiro disclosed that he grew up watching Zidane and sometimes gets overwhelmed while talking to the Frenchman.

Casemiro told The Guardian, “Even today I get a little nervous talking to him. I tell him he doesn’t know what he meant for us, for me. Yeah, I tell him that: you took ‘98 [World Cup] away but it didn’t change anything. Also, knowing him now, I can say he deserves it. He’s incredible: the humility, how he expresses football. He treats us with so much affection and love.”

“He’s very insistent; he always, always says: ‘Case, you can do more: arrive from the second line, feed midfielders, bring the ball out cleanly. This year, maybe I’ve had more protagonism with the ball, but I still know my job: rob the ball, give it to my team-mates. But Zizou is pesado (heavy going): always talking to me, wanting more. He says: ‘I’m not asking you to do something you can’t do; I’m asking you to do something you can.’ He trusts me a lot,” later added Casemiro.

Casemiro on his footballing addiction

Casemiro also disclosed, “I watch back, see the errors, evaluate. I love that. People say I think like a coach. I always try to read the game, the other team’s mind, their coach, what they’re trying to do. Often the smallest details – a meter either way – change everything. I have [football analytics platform] Wyscout and watch everything, from China or anywhere. My wife gets annoyed. It’s my work. There’s a time for everything but it’s my job. And I love it. My life is football. I have to think permanently about football.”

Casemiro has flourished and evolved a lot under Zidane’s guidance. The duo is said to have struck up a strong relationship with each other. Casemiro and Co will try to overturn a 2-1 deficit against Manchester City in a UEFA Champions League Round of 16 match. Real Madrid will face tough competition from Manchester city, when they travel to the Etihad Stadium on 8th August.

Also Read: ‘Ronaldo is ready to perform another miracle’ – Szczesny