Sir Mo Farah will not be able to defend his 10,000m Olympic title, as he unfortunately failed to qualify for the Tokyo Olympics. Farah missed the Olympic qualification time for the 10,000m at the British Athletics Championships held in Manchester. Earlier this year, he had decided to only focus on the 10,000m and not the 5,000m for the upcoming Olympics.

The qualification time for the Olympics was 27 minutes and 28 seconds, however Mo Farah ran a time of 27 minutes and 47 seconds as he lost his spot to defend his title from the 2012 and 2016 Olympics. He was on target pace for till 6km, but then unfortunately run out of partners and had to tough out the Olympic trials alone. Even though he was alone, the crowd willed him on. Farah began to drop off his pace at about 8000m, and he fought through the last lap but did not make the qualification time.

Mo Farah spent 3 years training for the Marathon; but Finally came back to his favourite event

Mo Farah had stepped away from the 10,000m event to train for the marathon for 3 years but finally came back to his favourite event for the Tokyo Olympic qualifications.

“Thank you for everyone who’s come out. Oh my goodness. I don’t know what to say. You go out there and give it your all. I’ve been lucky enough to have had the long career I’ve had. I’m very grateful but that’s all I had today.” Farah said to Skysports in a trackside interview.

When asked about whether his career would be ending soon, he said, “It’s a tough one. If I can’t compete with the best I’m not just going there to finish in a final. Tonight shows it’s not good enough.”

The British Athletics squad will be named on Tuesday, and for the first time since 2004, Mo Farah will not be on it. 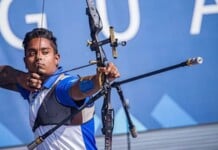 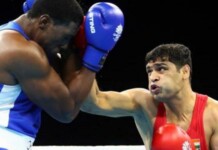