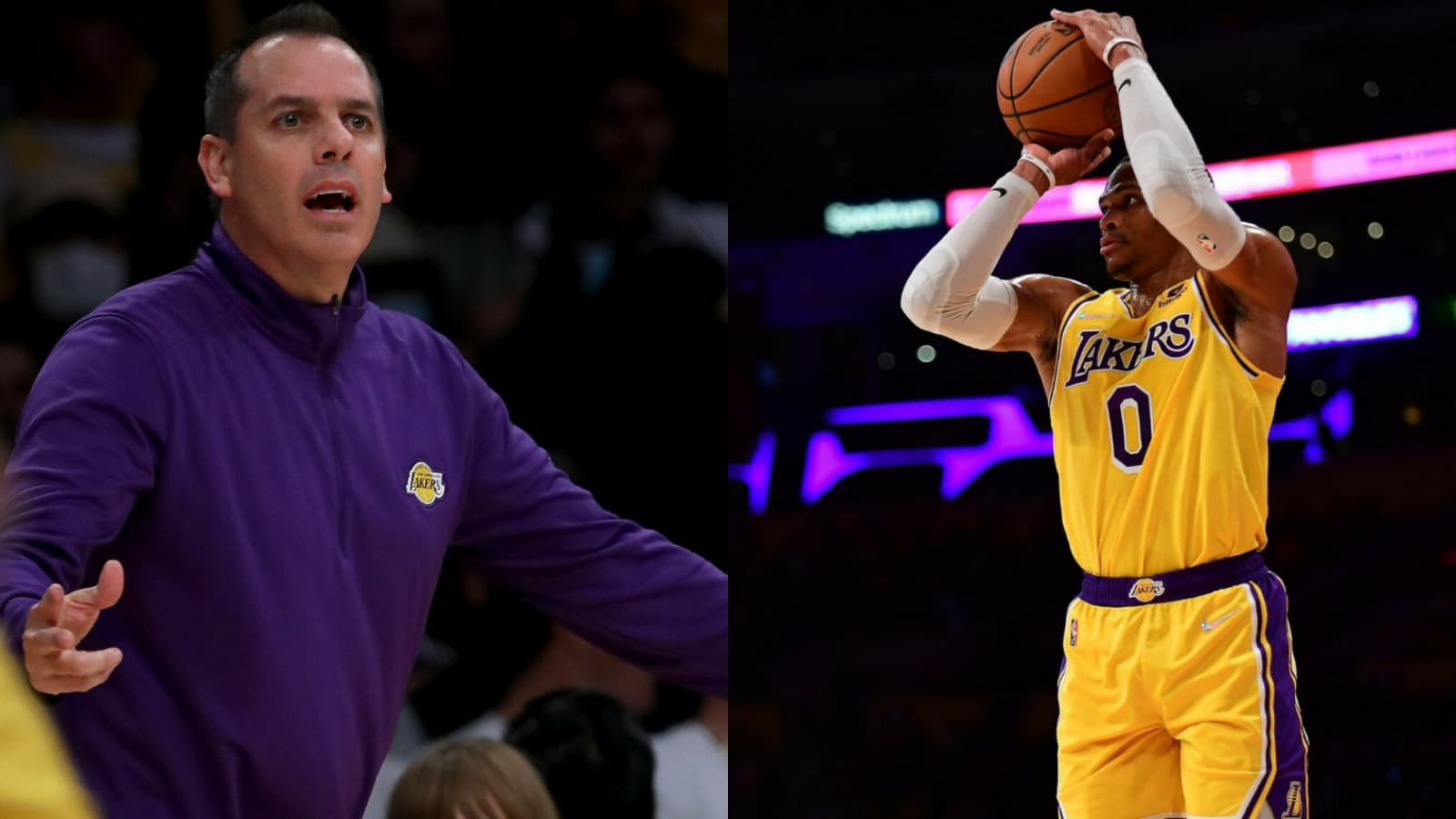 In their match against the Charlotte Hornets, the Lakers lost by a 114-117 margin despite Russell Westbrook showing up in the second half and scoring an uncanny 35 points in his 37 minutes played keeping in mind the form he had been in the past few weeks.

The game came down to a do-or-die when Russell Westbrook had the opportunity to either tie the game or go for the win by trying for a 3-point shot, and Russ chose the latter. With 0.7 seconds remaining on the clock, Westbrook unfortunately missed and the ball was then taken by Knicks’ PJ Washington.

I had no problem with the shot Russell Westbrook took: Frank Vogel

“The hottest guy in the gym has the ball in his hands…I had no problem with the shot he took. He was three-for-five from three in the second half and he went for the win. He knocks that down, we’re talking about one hell of a win,” said Frank Vogel during the press conference.

Despite Russell Westbrook scoring 35 points with 16-points in the last quarter alone, Lakers lost to the Hornets with a close margin at the closing minutes of the game. The exquisite performance by Russ in the second half was able to decrease the 20-point deficit the Lakers had brought them closer to victory, but they, unfortunately, weren’t able to pull it off.

For the Hornets, Miles Bridges scored 26 points with 6 assists and 8 rebounds. At the closing moments in the match when Westbrook was about to shoot the 3-pointer, Bridges tried to guard him while Westbrook was sizing him up, Westbrook went for the win and pulled up, eventually missing, to which Bridges said “I know he didn’t want to go to overtime I tried to get a good contest on him.”

Lakers’ coach Frank Vogel surprisingly didn’t disagree with Russell Westbrook’s decision to shoot the 3-pointer instead of trying for a 2 and said a few things, which we’ll take a look at, right now.

In the post-match presentation when the discussion was entirely about Russel Westbrook, as LeBron James and Anthony Davis were out due to injuries, Frank Vogel was asked if he disagreed with Westbrook’s decision to pull up a 3-pointer instead of going for a 2-pointer which would’ve tied the game and lead them to overtime, Frank Vogel surprisingly said:

“The hottest guy in the gym has the ball in his hands ready to make a play,” Vogel said. “He was 3 for 6 from the 3 in the second half and went for the win. He knocks that down, we’re talking about one hell of a win. It just didn’t go down for us. Russell was spectacular in that second half. He just really willed our team into an opportunity to steal one on the road.”

Frank Vogel trusted Westbrook due to the form he displayed throughout the match and how he turned up to save the Lakers in the last quarter.

Westbrook performed well in the game and took the Lakers close to victory despite LeBron and Anthony Davis playing in the match, which some people say is also the reason why Russ managed to play that well, pointing out that Westbrook has only managed to perform well when LeBron isn’t on the court.

In the past few weeks, Westbrook hasn’t been able to perform the way you would expect him to, like the OKC Russ who had a bang on performance most of the time and dominated games with his aggressive nature, but this trust that the coaches have put in him might be a factor that brings back his old performances.

Lakers have given the most shocking results keeping in mind the squad that they have. One would expect a team that has LeBron James, Russell Westbrook, and Anthony Davis also accompanied by many star players, would dominate the league, but that hasn’t been the case this season, not even something close to it.

The Lakers have had a terrible record of 24-26 this season standing at the 9th position on the Western Conference table, behind many of the teams you would expect to perform worse than the Lakers. Though Frank Vogel might believe in Russel Westbrook to perform in the matches or even go for game-deciding shots, it will be for us to see what kind of results these strategies will bring about for the Lakers.