PJ Washington and Justin Champagnie recently made headlines as they trend to almost throw hands with each other in their match-up and end up getting ejected. Justin Champagnie is a rookie for the Toronto Raptors who went undrafted in the 2021 National Basketball Association’s Draft and is currently on a two-way contract with Raptors 905 of the NBA G-league who got called up as the team struggles with injuries and COVID-19 protocols.

PJ Washington, on the other hand is a key player for the Charlotte Hornets drafted twelfth overall in the 2019 National Basketball Association’s Draft known for his good offense and one of the best defense as he erupts giving in lockdown time to offenders in important times. Recently the Toronto Raptors hosted the Charlotte Hornets at Scotiabank Arena and after some lead changes and physical alterations between the teams the game favored towards the Raptors as the final box score is 125-113.

Both the forwards were ejected with 1:46 left in the first quarter as they had a physical altercation started and almost exchanged hands since the security, refs and other players got into it and stopped them. Playing for four minutes, Justin Champagnie had 2 rebounds and 1 assist while PJ Washington had three points for four minutes.

Twitter reacts to PJ Washington and Justin Champagnie getting ejected

Washington and Champagnie both were going at each other from the start of stepping in and after two physical contacts, they had an exchange where they almost got into a brawl and ended up going back to the locker room as the ref issued fouls on both the forwards with immediate ejections.

Twitter has got a variety of reactions to this as fans demand a boxing match between them since the push-off from both sides made it clear they would be fighting if not separated by others. Fans enjoy such physical plays and since are posting their mixed reactions to it while some criticize the officiating system. Find some of many such reactions on Twitter here below: 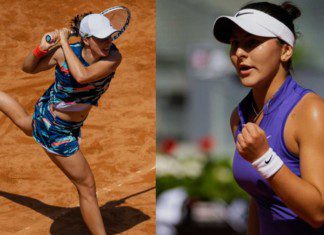 Prateek Sinha - May 12, 2022
The world number 1, Iga Swiatek, will meet the former US Open champion Bianca Andreescu as Andreescu will try to put a halt to...