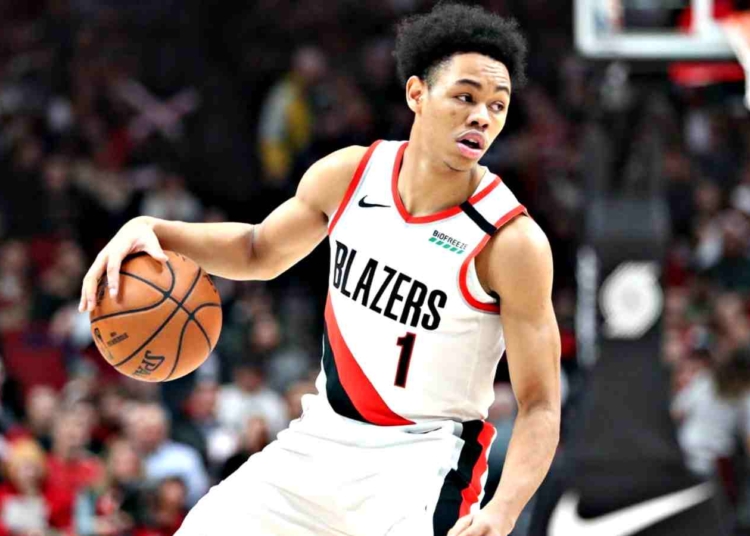 Anfernee Simons caught fire against the Utah Jazz on Saturday as he dropped 45 points for the win. The win for the Portland Trail Blazers didn’t come easy as the Jazz kept the game close. However, Simons’ performance proved too much for the Jazz players to handle.

Since last season the Florida-born guard has taken his offensive game to a different level. His points have increased since last season as in 2021 he averaged over 17 points. This 2022-23 season he has been averaging 24.8 points and shooting over 39 percent from the 3-point line.

The Blazers’ guard scored 45 points in 41 minutes, making 15 of the 25 shots from the field. He also made 7 of his 12 three points shots, maintaining his high shot percentage from beyond the perimeter. Jerami Grant also scored crucial 33 points for the Blazers as the two stars heavily tested the Jazz’s defense. Despite 5 players from the Utah Jazz scoring in double digits, they lost the game by 5 points.

The Rising Anfernee Simons is good news for the Blazers

Damian Lillard has been out of the lineup for the past 6 games, and Simons has utilized his time to the best of his profit. He has averaged well over 26 points and 5.7 assists since Lillard has been out with the injury. Moreover, his scoring streak has been helpful in keeping Portland afloat while Lillard remains out for the games due to his calf strain.

The new look of Anfernee Simons must be good news for the Blazers and Damian Lillard. Since CJ McCollum departed from Blazers to the Pelicans, Lillard has been looking for a co-star besides Grant to carry the offense in his absence. Grant and Simons are for sure going to take a substantial load off of Lillard in the regular and postseason games.

A grown Simons would only make the Trail Blazers more dangerous and a legitimate contender in the Western Conference. However, it would be interesting to see if Simons can maintain his scoring streak and keep the Blazers going while the West remains deeply congested.

As Simons dropped his career high against the Jazz, fans were left in disbelief considering the fact that the 23-year-old has never been considered a superstar. It is his only 5th season in the NBA. One of the fans wrote, “This NBA sh*t rigged”. Another fan wrote, “anfernee simmons is a problem 🔥”. Here are some reactions from the fans on Twitter;

Simons and the Blazers will face the Indiana Pacers tomorrow at the Moda Center for Blazers’ home game. The Blazers had risen to the top spot in Western Conference early in November, and since then they have fallen to the 9th sport with a 12-11 record. However, with the emergence of Simons, they would certainly look to capitalize on his offensive game and improve on every possible end.

Also Read: Jordan Poole Girlfriend: All you need to know about Kim Cruz