Josh Green had Norman Powell lying on the ground after faking the life out of him with a classic dribble move of his. 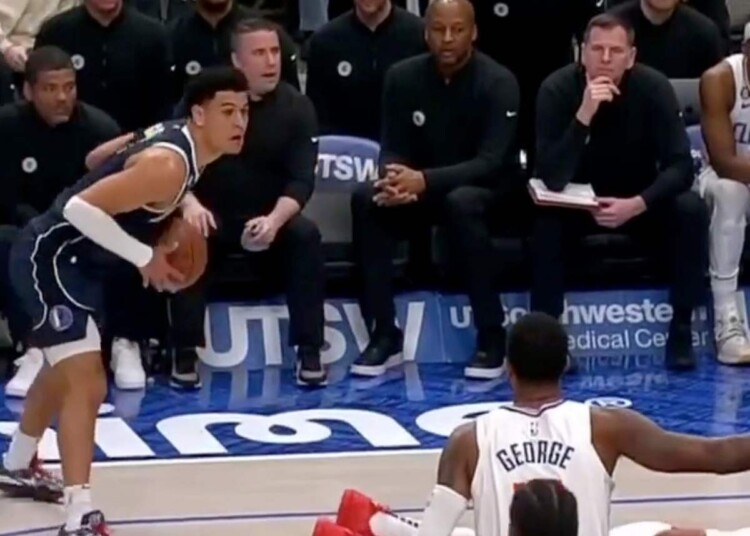 Josh Green did something that hasn’t been done many times on the basketball court. In a game between Los Angeles Clippers and Dallas Mavericks, he faked a move so well that his defender Norman Powell fell on the court badly. Perhaps, the move was just the first part of the embarrassment. No defender, who has been faked and is on the ground wants the player to make the shot. To Powell’s nightmare, Green drilled the shot from beyond the perimeter.

With almost seven minutes remaining on the clock in the second quarter, Spencer Dinwiddie came from the right side of the court. He scanned the court and passed the ball across to Dāvis Bertāns. Dāvis rose up to shoot the ball but faked his defender mid-air and passed the ball to Green, who was standing in the left-hand corner. Green faked going to his left and made a dribble move to the right which caught Powell by surprise. He spun and fell on the ground as if he was doing push-ups.

If the move from the Mavericks player did the Clippers guard badly, the three-point shot over him while on the ground made it even worse for him. The move was so clean that not even Powell appealed for the offensive foul on the play. The Clippers were facing their rival Mavericks and defeated them 112-98. It was their 25th win in 49 matches, and now stand in the 6th position in the Western Conference. But unfortunately, Powell was lying on the ground for some good seconds as Josh Green clowned him.

Related: Paul George leads the Clippers to a historic comeback against the Detroit Pistons

It was a low-scoring game for both teams, as only 3 players from Dallas and 4 from the Clippers scored in two digits. Kawhi Leonard scored game-high 31 points from the Clippers. Paul George and Norman Powell scored 22 and 19 points respectively. Reggie Jackson also contributed with 10 points. Luka Doncic from the Mavericks scored team-high 29 points.

Spencer Dinwiddie and Tim Hardaway Jr. scored 21 and 22 points respectively. The Clippers are still in playoff contention at the 6th spot. They are a pretty strong team but Kawhi’s and George’s injury have largely been the reason for their slump this season. With both back on the team, they will try to bounce back on track. The Mavericks are just above them in the 5th spot with a 25-23 record.

In case You Missed: