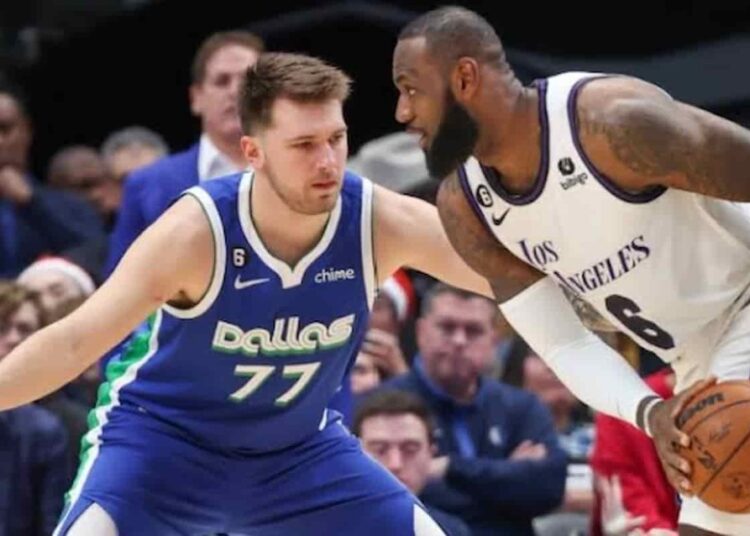 LeBron James and Luka Doncic just battled out against each other on Christmas Day. The most awaited matchup really lived up to the expectations and had everyone watching lost. As Luka Doncic and the Mavericks handed out an embarrassing L to the LeBron James led Los Angeles Lakers by turning around the whole game.

The Dallas Mavericks hosted the Los Angeles Lakers at American Airlines Center on Christmas Day. The game was quite head-to-head and closely contested for the first half. But the Los Angeles Lakers had built themselves a good lead to play around. As LeBron James and Russell Westbrook were taking care of the business. But as soon as the third quarter started the Hollywood-based team disappeared and it was just Luka Doncic and the Dallas Mavericks.

After the first half, the Lakers were leading at 54-43. But then they got completely destroyed by Luka Doncic and his team. As the Mavericks running a comeback dropped 51 points in the third quarter while playing some solid defense. The Lakers were limited to just 21 points and that’s exactly where they lost the game. As there’s no coming back from down there.

Luka Doncic and team didn’t give up when they were down by 11 in the first half. And, now they have made a record for the history books. As their scoring greats of 51 points in the third quarter has made history.It was the highest-scoring quarter on Christmas in NBA history and a league-record too so far this season. The previous record was for 45 points set by the Lakers in 1961.

Both the teams were horrible at shooting the ball, especially, from the three-point line. But the Mavericks overcame that huddle under Luka’s leadership and won it all by shifting the gameplay, pace and even on-court spacing and chemistry. The Lakers were in a good position to win it all. But as expected they sold the game away and now Twitter clowns them

Luka Doncic showed up to the game dressed up as a cowboy and was labeled as the sheriff by the fans too. And, he really lived up to the expectations fans had of him, unlike Russell Westbrook who showed up in a skirt. The Lakers Nation is extremely disappointed with LeBron James and the team for allowing the Mavs to score 51 points in the third quarter. You can find some of the many reactions and trolls posted by fans on social media platforms here below:

In the game, Luka Doncic dropped 32 points, 9 assists and 9 rebounds. Christian Wood backed him up by getting himself 30 points, 7 assists and 8 rebounds. But On the other hand, helpless LeBron James dropped 38 points, got 6 boards and dished 5 dimes. Westbrook tried his best to back LeBron but was limited to 17 points, 4 assists and 5 rebounds.

The Los Angeles Lakers currently are ranked at the 13th spot in the western conference with a record of 13 wins and 20 losses losing four straight games. While the Luka Doncic led Dallas Mavericks have moved up to the 8th spot with the record of 18 wins and 16 losses winning three straight games.