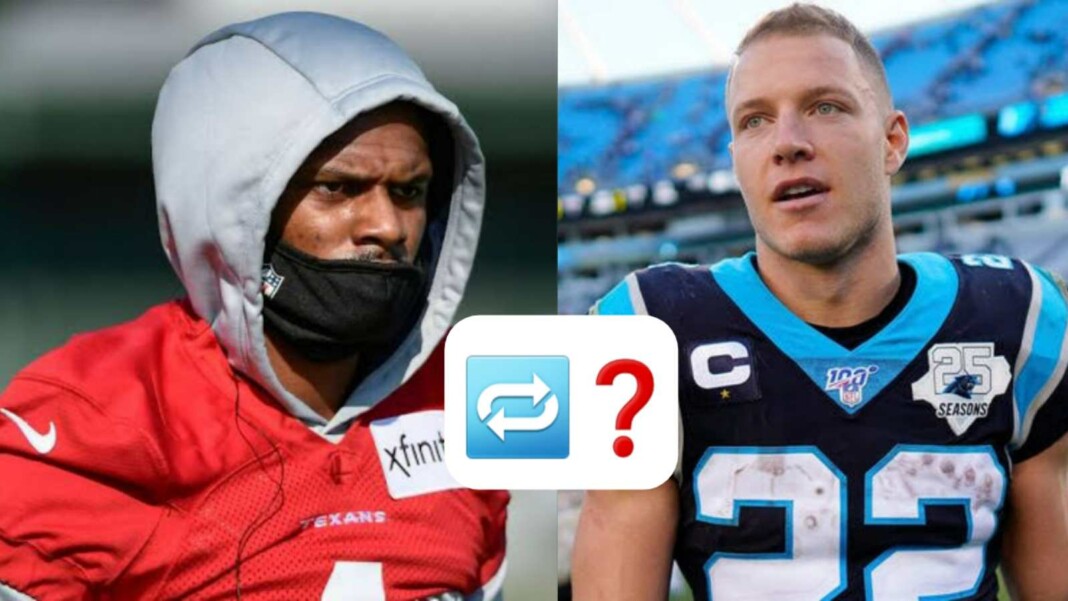 As the NFL trade deadline is almost knocking upon us, the contests for the prized stars from the various echelons are getting a lot more spiced up. Despite being involved in a lawsuit of 22 allegations of sexual misconduct, it seems that the on-field prowess of disjointed stalwart, Deshaun Watson is coveted by a lot of franchises. With all said and done, the latest addition to the list of suitors for Watson is Carolina Panthers.

In fact, they have arrived with a bonus and the bonus is the premium expense of Christian McCaffrey to onboard Watson. Going by the words of Jason La Canfora, the Panthers are willing to trade three high draft picks and McCaffrey to hire the services of Deshaun Watson. Though no solid reports of the move have materialized, yet if these rumours are to be believed this is the best offer by a mile that has been given to the Texans.

What would the trade of Deshaun Watson to the Carolina Panthers mean?

If this trade takes place, this would mean the pairing of Deshaun Watson with a young Carolina team and the sound of it is nothing short of a burning menace in the gridiron while the Texans will be receiving the compensation that would they eventually seek for the loss of Watson and also three players of gilt-edged stature joining their ranks.

The addition of Watson in the lineup of the Panthers would mean that they can shake off their earlier failures and challenge for the playoffs again, given the accuracy and expertise of the currently debatable NFL signal-caller. More importantly, the youth of the Panthers will be making sure of the fact that they will be coming in hot in the forthcoming years only if they can conjure a reliable name in the quarterback position.

However, this move will be coming with a lot of risk surrounding it, given the 22 allegations of sexual misconduct that are hot on the heels of Watson and it can also be a probability that after this season, he may not be available at all. This is also one of the prime reasons why other teams are not eyeing him. If this move does materialize, it won’t be something astonishing, given the alertness that was displayed by Stephone Gilmore to the New England Patriots.