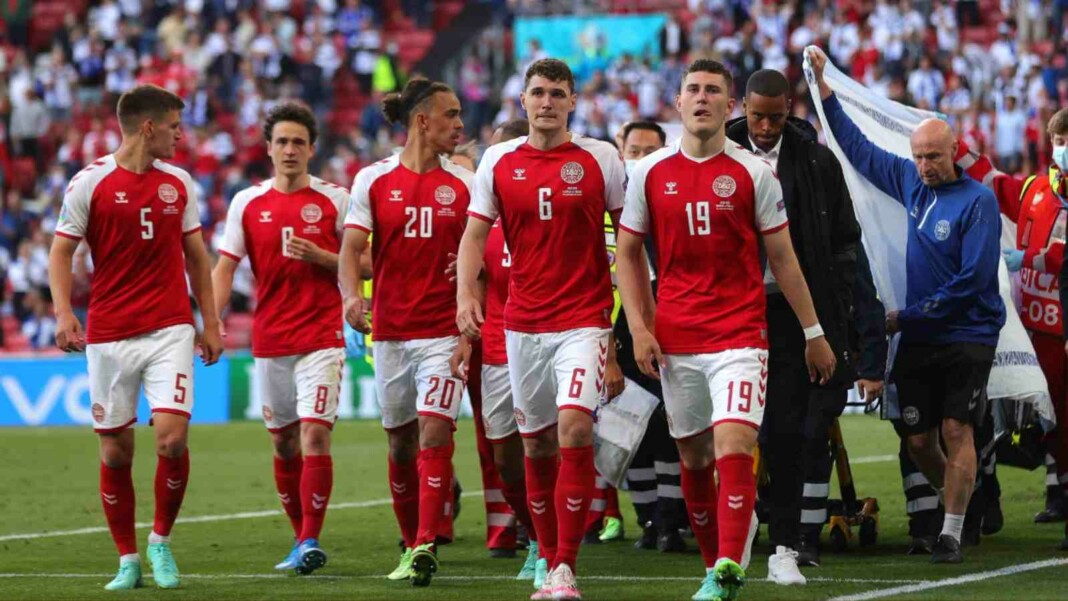 The football fraternity came to a standstill when Christian Eriksen suffered a cardiac arrest during the nation’s opener against Finland in Euro 2020 championship. The Inter Milan star collapsed suddenly near the corner flag in front of the fans immediately installing a sense of concern among all the viewers, players, and coaching staff. The match was suspended following the incident but the Denmark players decided to come out and complete the rest of the game when Eriksen’s condition was stabilized. However, former Euro Cup holder with Denmark, Peter Schmeichel believes that the players did not have a choice to not play the game due to the traumatizing situations as UEFA threatened the team with a 3-0 forfeit on opting to do so.

Peter was watching the match between the two sides and his son Kasper Schmeichel was guarding the goal or Denmark that evening. Kasper received a lot of praise from across the world for his act of consoling Eriksen’s wife, who was absolutely shattered seeing her husband go down in an unexpected manner. Peter gave his answer to ITV’s Good Morning Britain when asked if it was the players’ choice to go out and finish the match which has now raised a lot of eyebrows.

Schmeichel is of the opinion that UEFA gave the Denmark players three options which the players were unhappy about. He also clearly pointed to the coach’s comment after the game which underlines the fact that a game cannot be played with such traumatized feelings. Peter said that he is concerned about the impact of the incident on the Denmark players and he is not sure how much time it is going to last.

‘I actually saw an official quote from UEFA yesterday saying that they were following the advice of the player, the players insisted on playing – I know that not to be the truth.

‘Or, it’s how you see the truth. They were left with three options, one was to play immediately and get the last 50 minutes played.

‘The next one was to come in yesterday at 12 noon and finish the 50 minutes and the third option was to forfeit the game, 3-0.’

‘So work it out for yourself. Is it the players’ wish to play? Did they have any choice really? I don’t think they had.

‘As you can hear from yesterday’s press conference, the coach, he seriously regrets putting the players back on to the pitch.’

Peter further went on to say that his son, Kasper, described the incident to be a very traumatic one for the players as Eriksen had to be defibrillated and shocked back to life. As far as Eriksen’s condition was concerned, Denmark’s team doctor Morten Boesen later confirmed that the 29-year-old was stable having suffered a cardiac arrest and that ‘he was gone’ prior to being resuscitated. Professor Sanjay Sharma, a cardiologist at St George’s University Hospital in London and medical director for the London Marathon, said it was unlikely Eriksen would be able to continue with his playing football.

FirstSportz is the First Stop for all sports fanatics like you and us. Starting in 2019, we initially concentrated only on Olympic Sports, but to make it the first and final stop for all sports lovers, we have added every other sport which you might be looking for, like Cricket, Football, Tennis, Esports, NBA, MMA and much more.
Contact us: [email protected]om