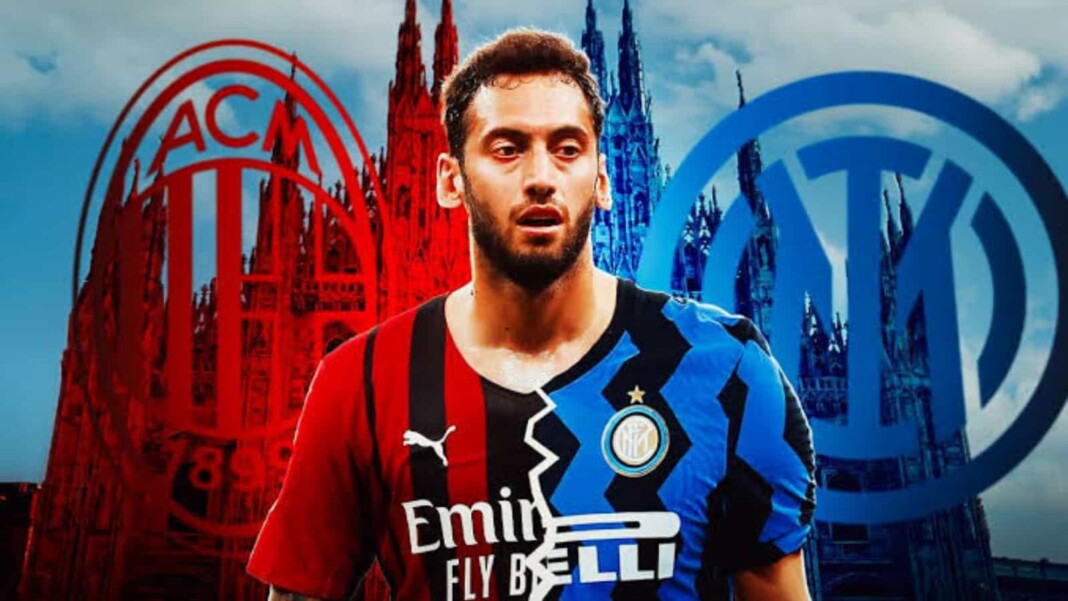 Hakan Calhanoglu, who moved to Italian club AC Milan back in 2017, has now controversially switched camps as Inter Milan announced signing the midfielder on a three-year deal. The current champions signed the midfielder for free after his contract with the Rossoneri were not able to get Hakan to sign a renewal.

Calhanoglu featured regularly for the Milan outfit this season, making 43 appearances across all competitions and contributing 9 goals and 12 assists. AC Milan finished second in Serie A, securing Champions League football after a gap of seven years. Hakan made a name for himself in the Bundesliga, pulling all the creative strings for German club Bayer Leverkusen. He also made quite a name for his freekicks, boasting of a wide array of techniques, and his strikes also include a knuckleball against Borussia Dortmund from 41 metres outside the goal.

“It’s a great thing, we know that Inter are a great team, a great club with a nice atmosphere, and great fans,” Calhanoglu said, “I’m very happy to be here, I’m going on vacation now, but I already have good feelings. We want to win the Scudetto this year too, so we’ll see.”

“I know Inzaghi’s game system, the 3-5-2 which can change into a 3-4-1-2 depending on the situation. I really like how he spoke; I have heard many positive things. There are great objectives, which is important because I also want to win something in Italy.“

The main talking point in this transfer would be the fierce rivalry shared by both the clubs, which has seemingly declined over the ages with players such as Zlatan Ibrahimovic too playing for both sides in the course of their career. Long gone are the days when a tunnel bust-up or a brawl over a controversial referee decision was almost guaranteed before kickoff, but a small spark of this was revived when AC Milan star Zlatan Ibrahimovic and Inter’ attack spearhead Romelu Lukaku shared a few heated moments last season.

After winning the league last season, Inter are reportedly trying to sell off players in order to balance their account books: which was the reason behind coach Antionio Conte quitting after what would be considered a quite successful season for the Nerazzurri. Making signings on free transfers would be one way to cut back on spending further this summer, and that makes Calhanoglu a great transfer as he opens up the possibility of offloading a midfielder.

As for AC Milan, they have already signed departing goalkeeper Gianluigi Donnarumma’s replacement in Mike Maignan and have made English international Fikayo Tomori’s loan deal permanent. They would be looking to make some more signings as Champions League football beckons next season, especially with Brahim Diaz and Mario Mandzukic also among the departures this summer.