Defending champion Naomi Osaka has started her title defense on a very positive note. After beating Camilia Osorio in the first round, she got the better of American Madison Brengle in straight sets 6-0,6-4 on Rod Laver Arena. After an extensive break last year, Naomi returned on court a week back at the Melbourne Summer Set where she withdrew from the semifinal.

This week too, she has looked very good in the first two matches. Especially in the second set against Brengle, Naomi dominated from the baseline and was hitting the ball with amazing pace. She later revealed that she has worked on this aspect of her game during the off season.

3-time grand slam champion Andy Murray too was very impressed with Naomi’s ball striking abilities from the baseline. Murray, who is a very keen observer of the sport, often shares his views on his twitter handle. During Naomi’s match, Andy tweeted: “Anyone hit the ball cleaner from the baseline than Naomi Osaka?”

After her match, Naomi responded to Andy’s tweet and called out the heart he puts into his game. “Anyone put their heart on their sleeve and fight harder than Andy Murray?” she wrote.

The reference of Naomi’s tweet was regarding the heart Murray puts in every of his match despite playing after a career threatening injury. He has won his first round match at the Oz Open, beating Nikoloz Basilashvili in 5-tight sets.

‘It was really cool to have someone like him talking about my game’: Osaka on Murray

Later in the post match press conference, Naomi once again spoke about Murray and said that she feels it’s shocking to see the Brit tweet about her game. She also mentioned that they hit together 3 years ago.

“It’s a little bit shocking to me to see Andy Murray tweet about me. I hit with him once like three years ago. It was really cool to have someone like him talking about my game,” Naomi said.

Naomi will now rest for a day before meeting yet another American Amanda Anisimova, who is in amazing form, in the third round on Friday.

Also read: Majestic from the defending champion! Naomi Osaka storms into the third round of Australian Open 2022 with a straight sets win 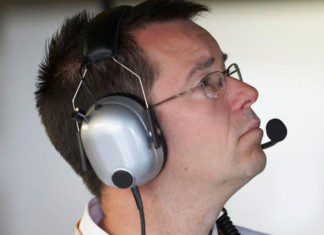 Gunaditya Tripathi - May 15, 2022
Last week we witnessed the first ever Miami Grand Prix, the week was exciting as we saw many familiar faces going up and down...