World No. 13 Naomi Osaka has started well in the 2022 season grabbing a win in her very first match as she returned to Tour at the ongoing 2022 Melbourne Summer Set 1 where is the top seed. The 4-time Grand Slam champion won her match against Alize Cornet in 3-sets to start her season on a winning note.

Osaka will be the defending champion at the upcoming 2022 Australian Open having won the Grand Slam in 2021 dropping only 1 set throughout the 7 matches she played at the tournament. After a troubled 2021 season where she played just 24 matches of which 20 were on hardcourts, Naomi will be looking for a much better season in 2022.

It is no secret that Naomi is currently in a relationship with Cordae Amari Dunston, commonly known as just ‘Cordae’. The 24-year old music artist is set to launch his new track and posted a teaser video on his official Instagram handle announcing he will upload the full song if his post receives 25,000 comments. Naomi added the post to her story and wrote, “I’m so excited.”

Naomi Osaka to take on Maryna Zanevska in Melbourne

Naomi is yet to confirm if she is playing in any WTA event in the second week for more practice going into the 2022 Australian Open that is scheduled to begin from 17th January at the Melbourne Park. In case she is able to defend her title, she might also see herself breaking into the Top-10 of the WTA rankings as she has slipped to the 13th place in the rankings after her no-show in many events in 2021.

Also Read: Murray brother CALLS OUT Novak Djokovic for getting special treatment at the Australian Open! 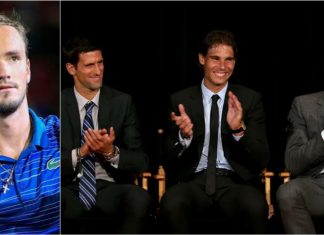 Sarthak Shitole - January 27, 2022
World No. 2 Daniil Medvedev played one of the longest matches of his career during the quarter-finals of the 2022 Australian Open against Canadian...