by Abhinavendu Singh
in Football, Tennis 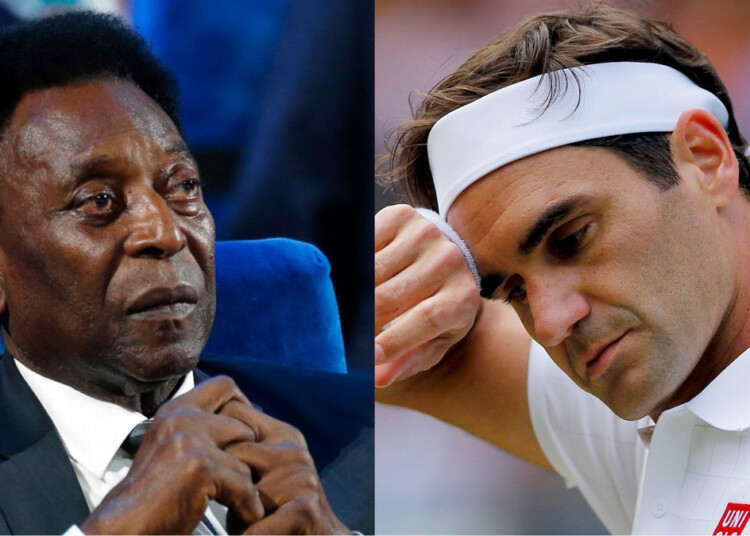 One of the most loved athletes ever Edson Arantes do Nascimento, cherished by his fans as Pelé, bid goodbye to the world. He took his last breath yesterday after a prolonged battle with cancer. Swiss legend Roger Federer joined the tennis fraternity in paying respect to the global icon.

Pele was the biggest sporting personality of the 20th century. He led his country to the World Cup triumph three times in 1958, 1962, and 1970, the only player to do so. He was labeled “the greatest’ by FIFA and his record of 1,279 goals in 1,363 games is recognized as a Guinness World Record.

“Thank you for inspiring millions of sports fans and athletes,” Federer wrote. “I consider myself very fortunate to have met you and had the chance to learn from you and look up to you,” he added.

Federer goes further admiring the football legend and adds, “You were one of the first real global sports icons. Rest in peace, King Pele.”

Related: Rafael Nadal gets surprised at practice session by his wife Mery and son Rafa

When Roger Federer got a chance to meet Pele in Brazil

Roger Federer got a chance to meet Pele in 2012 when he traveled to Brazil for a sponsor. It was a huge fanboy moment for the 20-time Grand Slam winner.“That was a big moment for me in my life. It was surreal. I’m really grateful that I had this opportunity,” Federer had described the meeting at that time.

Federer joins the likes of Rafael Nadal, Billie Jean King, and Martina Navratilova to pay respect to the ‘Black Pearl’.”Today a great of world sport is going again. A sad day for the world of football, and for the world of sports,” Nadal wrote on his Instagram earlier today. King expressed her grief by calling Pele ‘a true ambassador of the beautiful game.’

Pele with his master skills and a winning smile ruled the heart of every football fan across the world. His reverence knew no boundaries. With his demise, the world has lost yet another of its favorite stars. There will be many football legends in the future but no other Pele.

Related: “You’re the people’s champ”- Fans support Nick Kyrgios as he take a dig at Australian media and critics