WATCH: Jelena Ostapenko nearly knocks down a ball kid with her forehand in the Australian Open quarter-finals, apologizes immediately

Jelena Ostapenko's mistimed shot almost hits a ball kid on her head during the Latvian's quarter-final clash at the Australian Open 2023. 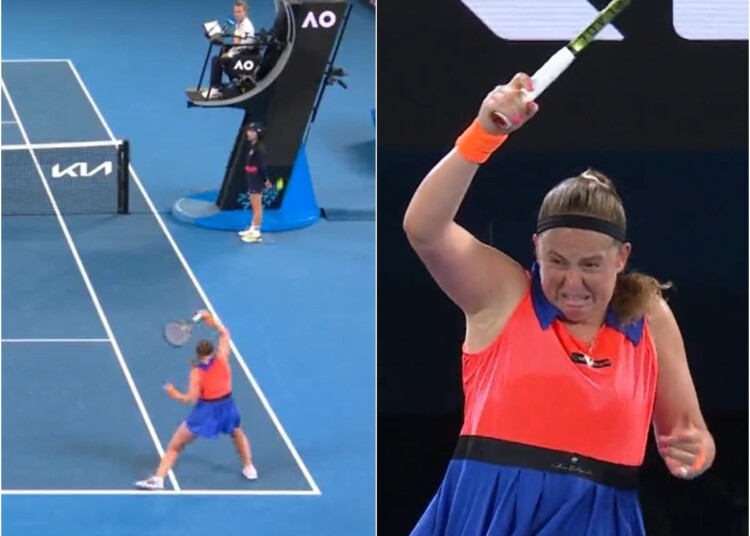 Day 9 of the 2023 Australian Open has commenced and so have the quarter-final rounds. The first quarter-final match of the Slam was fought between reigning Wimbledon champ Elena Rybakina and former French Open winner Jelena Ostapenko.

Rybakina came out on top winning the match 6-2, 6-4 in 79 minutes. She had not gone past the third round in Australian Open before this year. It was another ‘How to hit aces’ workshop today on the Rod Laver Arena by the Kazakh firing 11 aces to take her tournament ace tally to 29. She now tops the charts for most aces at this year’s tournament on the women’s side.

The first set saw Rybakina just cruising through to draw the first blood. Ostapenko tried to delay her win but the 22nd seed was too good for her. While Ostapenko is known for her drama, there was none today except for one close call. During the fourth game of the second set, Rybakina was serving at 40-40.

She hit her serve across that came on Ostapenko’s forehand who returned the ball at full power. As much as she did invest in power, there was no direction to it. The ball flew away and nearly took down a ball kid standing just beside the chair umpire’s stand. The kid did not have enough time to move but was fortunately not hurt as the Latvian immediately apologized to her while the ball kid returned an awkward smile.

In case you missed it: Novak Djokovic dumps Alex De Minaur with ‘no relationship ‘ comment

The wait for a second Major continues for Jelena Ostapenko

Jelena Ostapenko, ranked as high as World No. 5 back in 2018, won her only Major in the 2017 French Open. She had defeated Simona Halep in the finals after losing the first set. Not only was the Roland Garros title her first Grand Slam title, but it was also her first WTA Tour title. She had celebrated her 20th birthday two days before winning the Major.

Since then, things have gone downhill for her, however. Her title defense ended in the first round. She has reached the third round in Paris only once since winning the Grand Slam title. In the other three Slams, her best run came in the 2018 Wimbledon when she reached the semis. This year’s Australian Open was a good opportunity for her to try her luck at another Major but it wasn’t meant to be.

As for Elena Rybakina, she is in the semi-finals for the first time in Melbourne. She will now take on the winner from the clash between Jessica Pegula and Victoria Azarenka. Pegula is in her third consecutive Australian Open quarter-finals whereas Azarenka, a two-time winner in Melbourne Park, is eyeing her third title.