WATCH: Rafael Nadal’s wife Mery gets emotional seeing her husband struggle with injury and leave the court at the 2023 Australian Open

Rafael Nadal's wife, Mery Xisca Perello, was in tears in the player's box as her husband was struggling with pain and eventually lost the match. 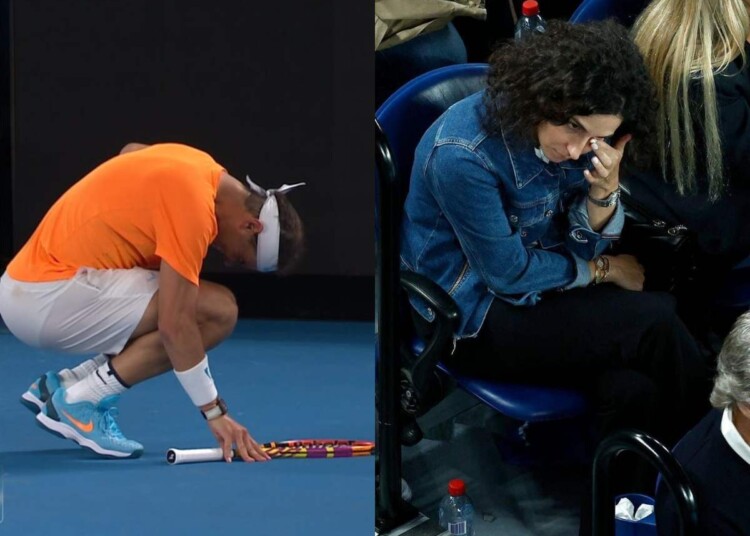 Nightmares for the 22-time Grand Slam champion Rafael Nadal this season are piling on as he was seen struggling in his second-round encounter against Mackenzie McDonald at the Australian Open 2023. He was trying to return the shot but missed it and sat down on the court as he reeled in pain.

He had to take a medical timeout. His wife, family and team were seen in tears. Many believe that his hip injury may have resurfaced. However, he got back on his feet again to take on his opponent.

Rafael Nadal did come back to the court, but all his efforts could not help him to win against the current World No.65. This loss shocked the tennis world and broke the hearts of his fans. The scoreline read Mackenzie McDonald beat Rafael Nadal 6-4, 6-4, 7-5.

This loss could be a major upset for Rafael Nadal

Rafael Nadal entered into the Australian Open 2023 as defending champion and top seed. However, his form and fitness levels tell a different story. He lost seven out of the nine matches that he has played in the last few months since November, 2022. His form began to dwindle in the ATP Finals 2022 in Turin, where he lost two out of three Group stage matches.

He did not start the 2023 season well as he lost both his singles matches in the United Cup 2023 against Team Great Britain’s Cameron Norrie and Team Australia’s Alex de Minaur. The 36-year-old participated in the tournament playing for Team Spain.

He was also visibly struggling in his first round match at the Australian Open 2023. The current World No.38 Jack Draper, gave him tough competition before he began cramping in the third set and lost the match in four sets. The Spaniard had a close shave but won the match 7-5, 2-6, 6-4, 6-1.

The current World No. 2’s dream of winning his career’s third Australian Open title vanished into thin air after losing to World No.65 Mackenzie McDonald. Now, he has to decide the course of his career. Clearly, his body is not supporting him. The next few months are going to be tough for him, his family and team as he may have to take some important decisions.

WATCH: Alexander Zverev stops the match and asks the door to be shut during his match against Juan Pablo Varillas at the 2023 Australian Open