No one embodies ‘dream big, and achieve’ more than the Williams sisters, two black girls from Compton who went to do what was almost unthinkable. Shattering glass ceilings and breaking records like no one could have imagined, Serena and Venus Williams scripted history and how. Serena and Venus have won 30 grand slam singles titles (Serena: 23 Venus: 7) 28 doubles titles (Serena: 14 Venus:14, paired together and unbeaten in finals), and 4 mixed doubles titles (2 each).

While plenty has been said about the duo’s indomitable spirit and admirable work ethic, one rarely took time to appreciate the paternal force guiding them throughout the journey. Their father and first coach, Richard Williams was the original dreamer! He dreamt big, envisioning a bright future for his daughters. Inspired by Italian legend Virginia Luzici, Richard wrote an 85-paged manifesto, outlining his goals for his girls. Then, he put them to work, training them rigorously for years. Their combined dedication paid off, with both sisters breaking out on the tennis scene during their teenage years, and establishing dominance that has lasted for over two decades.

While tennis fans were aware of Richard’s contribution, it took a biopic for the rest of the world to recognize his importance. Will Smith starrer King Richard hit the theatres in November last year, garnering critical acclaim and widespread admiration. Many people, including celebrities, had reacted to the movie, claiming that it was Oscar-worthy! Well, their predictions were on point, as King Richard collected 6 nominations for the upcoming Academy Awards 2022, and it seems that Serena Williams cannot contain her happiness!

“This is CRAZY!!!” Serena Williams shares her excitement over her father’s biopic being nominated in 6 Oscar categories!

Serena Williams took to Instagram to share her happiness over the big news, sharing a series of pictures with the caption “I woke up to this. Our film is really nominated for an OSCAR!!!!!! This is CRAZY!!!!!!! From Compton to Wimbledon to Academy awards. Everyone can dream. And your dream can come true. Ok, I am definitely crying this morning. Congrats to the entire film and crew.”

Serena’s emotions were rather palpable. While she tagged some important people in the post, including Will Smith, Aunjanue Ellis, and her sister Venus, she apologetically added “Congrats to EVERYONE I did not “@” as I am so emotional”.

Directed by Reinaldo Marcus Green, King Richard was nominated for an Oscar in the following categories: 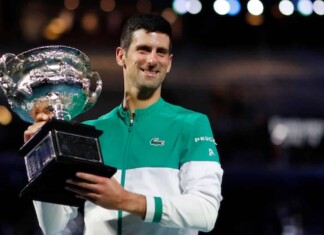 Kimi Raikkonen set to return to Monaco for a charity football...