Riske reached a career high ranking of 18 in 2019, has won two titles on the WTA Tour and is seeded number 9 in the tournament. Riske was seen playing in the Tour at Wimbledon where she suffered a disappointing loss in the first round. Riske played at the Silicon Valley Classic in 2018 and was knocked in her first match, the round of 32 by Ashley Kratzer in three sets, 4-6, 6-4, 5-7. Riske has already made a better impression this time by reaching the round of 16. In the round of 32, she triumphed over Coco Vandeweghe in straight sets, 6-3, 6-4.

The young 23 year old, Konjuh has won one title on the WTA Tour which she won in 2015 and reached a career high ranking of 20 in 2017 after Wimbledon. However, in September 2017, she underwent a surgery on her right elbow which put her out of the top 500 and eventually, top 1000. In San Jose, Riske was seeded number 4 in the qualifiers and eased through her two qualifying matches in straight sets. In the round of 32, Konjuh sealed an impressive win after defeating World number 52, Marie Bouzkova in three sets, 7-5, 3-6, 7-5. It was a very close match with a difference of only one point in the total points won. However, Konjuh was able to break 8 times compared to Bouzkova who broke 7 times.

Riske has not had a great year on the Tour having won only 2 matched throughout 2021 and lost 7. On the other hand, Konjuh has a win-loss record of 29-16. During the hard court season, Riske has only played one match which was at San Jose, while, Konjuh played at Hungary and has played 3 matches at San Jose. Thus, she has settled into the new hard court surface.

Alison Riske vs Ana Konjuh: Live Streaming and Where to Watch 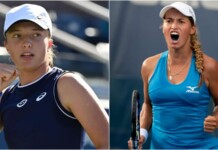