Greek professional tennis player, Stefanos Tsitsipas has seven singles career titles to his name. His current ranking according to the Association of Tennis Professionals is World No.4 and his highest ranking was World No.3.

Like Modern day great, Novak Djokovic, Tsitsipas is an aggressive baseline player who can play the all-court player style too. His forehand is his strength which makes him even more dangerous. Stefanos is one of the most promising players of the ATP.

Recently in an interview with the ATP, Setafnos was asked a series of questions. He was also asked about his childhood to which he shared some of the beautiful memories from the time he started learning tennis.

Tsitsipas recalled the time from his first-ever tennis classes. He said that whenever his parents were late to pick him up from class, he would pass the time by playing against the wall and imagining that a Major championship was on the line.

“I remember finishing with practice and my parents would be very late to pick me up, like a couple of hours and I would stay and play on the wall for hours, recreating a Wimbledon or Roland Garros title playing against that wall,” Stefanos said.

“Thinking about it now, I have come a long way.”

“I remember next to the tennis club there were neighbors and it was a residential area and I was creating a lot of noise when playing against the wall and people didn’t like that. But I kept playing,” he added. 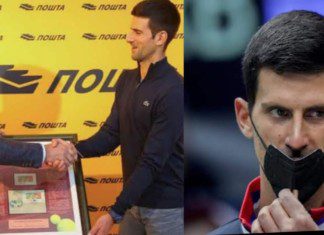 Parth Dubey - January 12, 2022
Novak Djokovic has admitted that he did attend an event while knowing that he was Positive for Coivd -19. In his statement, Djokovic describes...