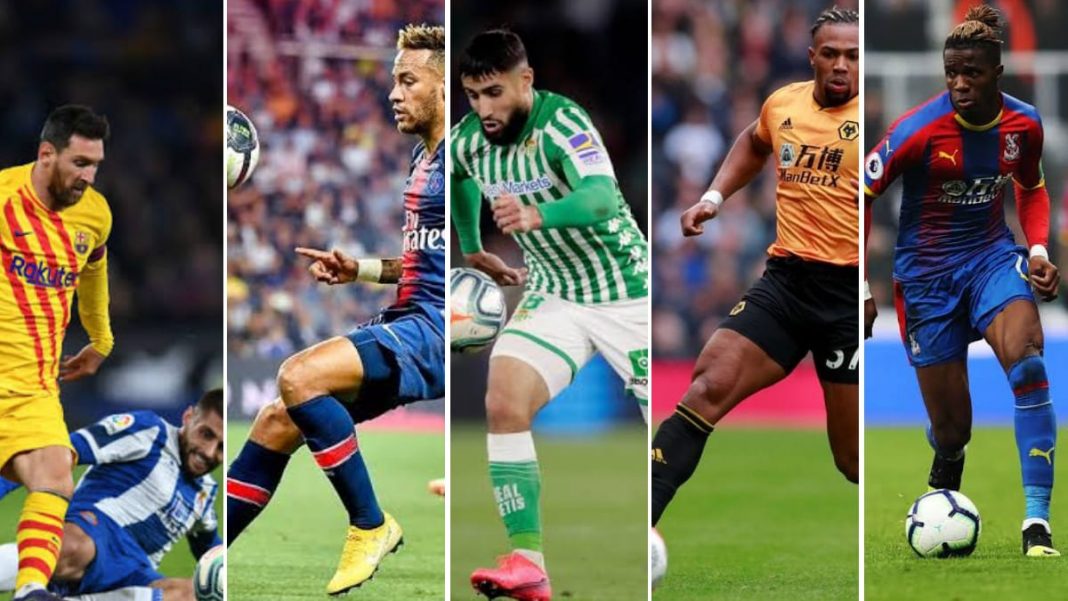 The 2019-2020 season saw players pull out some mind boggling tricks and plays this season. Despite the Covid layoff, the players were able to imitate excellence on the ball and even showcase their dribbling skills. These players made the game even more beautiful and lively with their ability to take on multiple opponents. So here’s a list of top 10 dribblers in the Europe’s top five leagues.

One of the breakaway star of this season Adama Traore has attempted a total of 246 dribbles and 183 of them resulted in success. The former La Masia graduate has been Europe’s most prolific winger of the season. Traore scored a total of 4 goals and provided 12 assists in all competitions. The 24 year old has a 74% success rate in dribbling.

Wilfred Zaha attempted a total of 267 dribbles in the 2019-2020 season, which is the highest in Europe. However, the Ivorian international could only complete 163 of them to perfection. Wilfred scored a total of 4 goals and provided 5 assist for a struggling Crystal Palace side. Despite less goal contribution Zaha still is one of Europe’s hottest properties.

The 2019 Ballon D’or winner was not far behind in the dribble race as well. Lionel Messi attempted a total of 263 dribbles in the 2019-2020 campaign and reaching a succession rate of 72%. The Argentine scored 25 goals and gave 21 assists for FC Barcelona. Messi has a high dribble success rate despite missing the start of the season.

The Brazilian superstar had a high success rate in dibbling, despite his team’s season finishing early due to Covid outbreak. Neymar attempted a total of 148 dribbles, completing 90 of them with utmost perfection. Neymar is a trickster on the field and usually leaves his opponents on the floor. Despite constant injuries, Neymar emerged as Ligue 1’s top dribbler.

The Sassuolo winger possessed the highest dribbling rate in Serie A. Jérémie Boga attempted a total of 210 dribbles and completed 132 of them in the process. Boga also contributed 11 goals and provided 5 assists for Sassuolo in all competitions.

The 23 year old Italian central midfielder completed a total 93 dribbles in the 2019-2020 Serie A campaign. Gaetano Castrovilli’s dribble completion rate was of a whopping 74%. Castrovilli also regained possession for Fiorentina 254 times this season.

Despite a move to a low-key mid table side Real Betis, Nabil Fekir showed that he hasn’t lost his ability to dribble past players. The French international completed a total 98 dribbles from 151 attempts. Nabil also managed to complete a total of 799 passes. He provided 7 goals and 7 assists from 32 appearances in La Liga’s 2019-2020 campaign.

Ikone has established himself as one of Ligue 1’s emerging talents. The 22 year old completed 73 dribbles from a possible 120 attempts. He had a a success rate of 60.5%, in 28 outings for the French outfit Lille. His box to box playing abilities has established him as a potential transfer target in Europe.

The former Ligue 1 star has taken the English Premiere league by a storm. Saint-Maximin attempted a total of 180 dribbles completing 121 of them in the process. Thus establishing a successful dribble rate of 64%.

The Argentine midfielder completed 102 dribbles from a possible 142 attempts. Despite suffering relegation in the 2019-2020 with Norwich, Buendía had great season on an individual level. Through his great first touch and dynamic pace Buendía established himself as Premiere leagues’s finest dribbler for the 2019-2020 campaign.  Emi Buendía is being touted for a move away from the canaries.