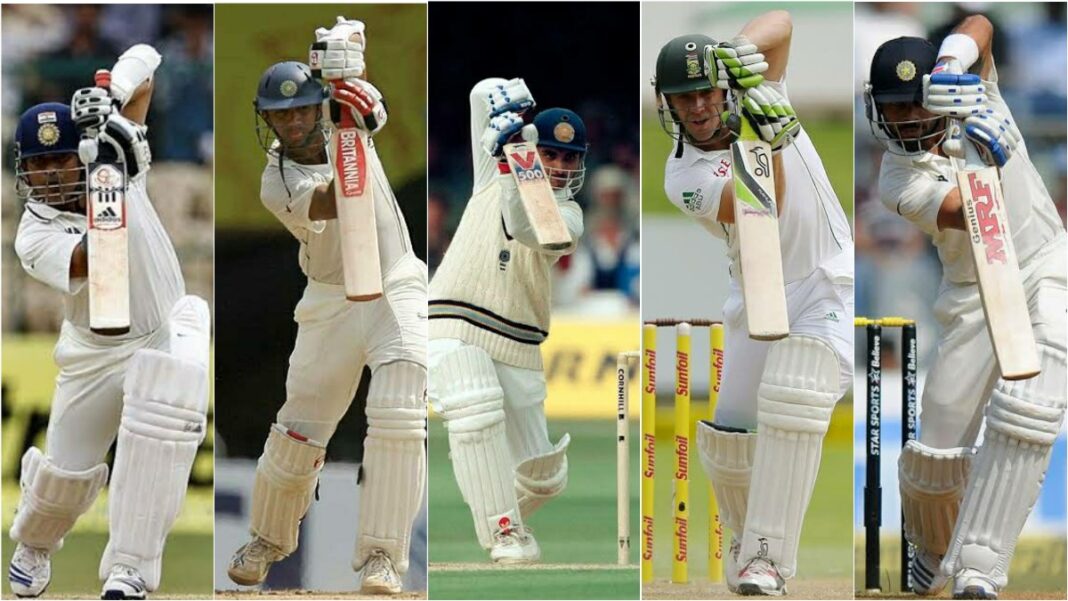 Over the years, there have been players who are called ‘legends’ and then there are players who are ‘not legends’ but are recalled for their emblem shots, just like Virender Sehwag known for his uppercut and AB de Villiers for his 360-degree playing style.

In contemporary cricket, players invented new shots mostly every match but the elegance of old textbook cricket shots like cover drives and straight drives survive as precious investments in the game.

The batsman needs to get his timing, footwork, body position, the position of the head and the ability to judge the length of delivery completely spot-on, in order to play the perfect straight drive.

On that note, here are 5 greatest players who play straight drive to perfection:

The Little Master almost always hit the ball with a little effort with a ‘classic’ straight bat. There were just a few sights better in cricket than his ‘straight drive.’

No cricketer, past or present, has played the shot better than the Mumbai batting maestro. It was all so blissful and yet nonchalant: the lifting of the bat, making it meet the ball gracefully and then stroking it straight back past the bowler with an effortless thump.

You could watch it for hours at end and yet never get bored of it. Even the bowlers couldn’t hold back to admire it.

However, what made him the best player of the shot was that he played it to perfection with far more regularity than most other batsmen and in addition to that, the straight bat and high elbows made the shot look even more stunning.

Few players who belong to the modern age are a better fit for the notion of the classical cricketer than this man. Technically sound and strong off either foot, Kallis is adept at playing both the seamers and the spinners.

However, his primary emphasis is on defence, he is always on the lookout for runs and is severe on anything loose. He can play practically every shot in the book, though his straight drives are the best.

Kallis is the only man to have scored over 10000 runs and taken over 250 wickets in both forms of the game (T20Is excluded).

Ricky Thomas Ponting – a right-handed batsman from Tasmania – is the highest run-getter for Australia in both Tests and ODIs and is also their most successful captain.

Although the hook and the pull became his most celebrated shots, it should not be forgotten that he was easily among the best exponents of the straight drive and he did it superbly during his 17-year long career (1995-2012).

He has all the shots in the book and certainly is an ideal role model for any youngster of the existing generation. Though natural elegance might not be his attribute, Punter more than makes up for that with his stunning footwork.

Michael Clarke is a batsman of great talent and incredible endeavour and emerged as an encouraging name when breaking into Australian squad was no mean accomplishment.

Clarke’s introductory years were restored with breathtaking centuries. He has been a picture of dignity and confidence with the willow. Never quite a power hitter his driving was a sight for the heavens.

He is one of the very few who go through with the straight drive providing a perfect camera moment for the photographers. He became only the 4th Aussie skipper to lift the ICC World Cup Trophy after Border, Steve Waugh and Ponting.

Over the past, there are very few players who can ramble of a better record than former Indian great Rahul Dravid, and throughout the policy of his career spanning almost 16 years, he endured one of the best champions of the straight drive.

The straight drive was definitely one of the more important constituents of his repertoire of strokes. Moreover, he looked glorious when he played it.

The right hander excellent footwork, the straight bat and the high elbow made the stroke look incredibly superb for anyone who had the exemption to watch him play live.