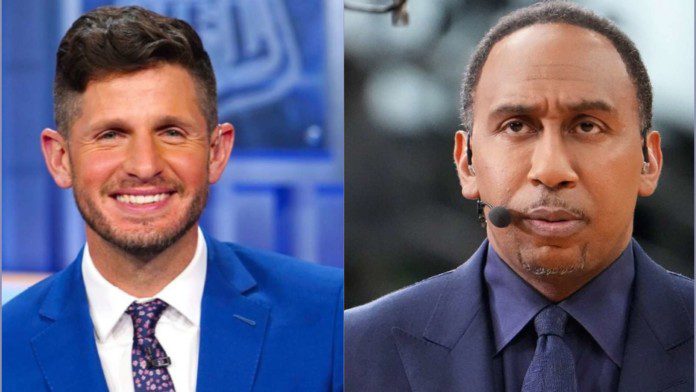 Dan Orlovsky might have retired from NFL, but his fighting spirit has definitely not toned down a bit. He surely knows how to give it back and he showed everyone just that while roasting famous American TV personality Stephen A Smith on a podcast recently.

You might wonder, why the former Detroit Lions quarterback would do so, its because a few days ago Curry had dished out a bit of roast on his fashion choices.

Orlovsky took the opportunity on a live show showing everyone a sequence of photos he had collected of Stephen A Smith from his past appearances in the media.

“First of all, don’t talk about my hair, when it looks like you got lined up with a fork. Secondly, I went on the internet and found this- It looks like you’re wearing Michael Spears’ suit,” said Dan Orlovsky of the first two pictures which he showed on camera.

“Third of all, you’re wearing suits that match the colour of my coffee in the morning. What is the colour of this suit? It’s hideous. Get a different suit… You’ve got a fake chain on… Come on,” Dan Orlovsky finished off in a hilarious segment to which Smith could only retort back with a single excuse that the pictures were all about 10 years or so older.

Manan Goel - May 13, 2022
The United Arab Emirates President Sheikh Khalifa bin Zayed Al-Nahyan passed away at the age of 73, as reported by several news agencies. Sheikh...