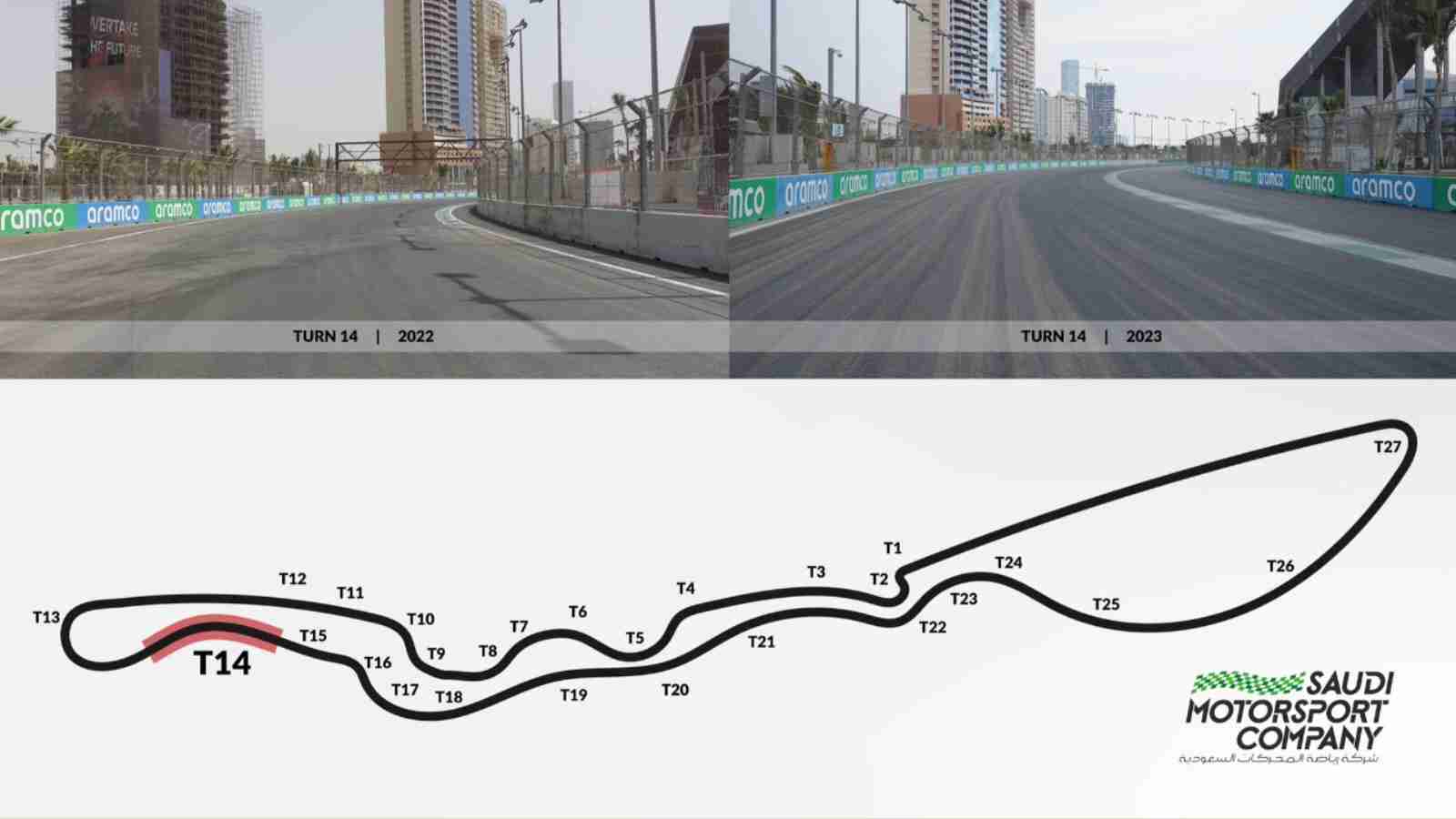 The Saudi Arabian Grand Prix is a recent addition to the Formula 1 calendar, having held two races since 2021. The track has earned itself a reputation for being incredibly fast despite possessing the tightness of a street circuit. The drivers are forced to put the cars on the limits, merely a couple of inches away from a disaster. Thus Jeddah may have garnered praise from fans, but it has also witnessed some high-speed crashes, which could lead to a catastrophe in the future.

As such the race promotors had previously made tweaks to the track ahead of the 2022 iteration of the race, and now have revealed plans of further track amendments in a bid to enhance the visibility of the circuit and its safety. Arguably the biggest change is the reprofiling and kerb tweaks at Turns 22-23 high-speed sequence of the Jeddah circuit, leading to an expected decrease in the racing speed of around 50kmph (31mph).

Other changes include the shifting of the walls at Turn 14 and Turn 20, in order to increase driver visibility of these quick blind corners. The fences at Turn 14 have been moved 7.5 meters while the walls at Turn 20 have been pushed by 5 meters. Similarly, the walls at Turn 8 and Turn 10 have also been moved back. New bevelled kerbs have been placed around the track at Turns 4,8,10,11,17 and 23 as well as the addition of rumble lines at Turns 3,14,19,20,21, these inclusions will demotivate the drivers from going wide to gain an unfair advantage and help enforce track limits.

Jeddah race organizers confident in the new tweaks to the circuit

The Saudi Motorsport Company has enjoyed the event’s success in the past two years and the organization is optimistic about the results of these new alterations to the Jeddah Corniche Circuit. Martin Whitaker, the chief executive of the Saudi Motorsport Company, stated the role of feedback from the drivers and F1 in bringing about the new changes, he said, “The evolution of the Jeddah Corniche Circuit continues apace and we are excited to add these further tweaks to our magnificent track as a result of positive consultation with the FIA, F1 and the drivers.”

Whitaker mentioned the enhanced spectacles, the fans will witness in the 2023 Saudi Arabian Grand Prix, which will be held in March next year, with the Brit expressing the organization’s confidence in the success of the new additions to the track. Martin further stated, “We are confident these changes will lead to even faster, more exciting and – crucially – safe racing and we can’t wait to see the world’s greatest drivers battle it out here under the lights again in 2023.”

Formula 1 has a 15-year deal to host a race in the Kingdom of Saudi Arabia with a planned transition from the Jeddah Corniche Circuit to a new state-of-the-art facility in Qiddiya. Till the construction of the Qiddiya track, F1 will continue to race in the country’s capital city, which has garnered praise for the action-packed racing. The effectiveness of the new tweaks will only be seen at the race next year but the morale of the organizers does indicate a safer and more exciting iteration in 2023.