Pit stops are integral to F1. However, sometimes teams fail miserably in the pitlane, we take a look at the longest stops in history. 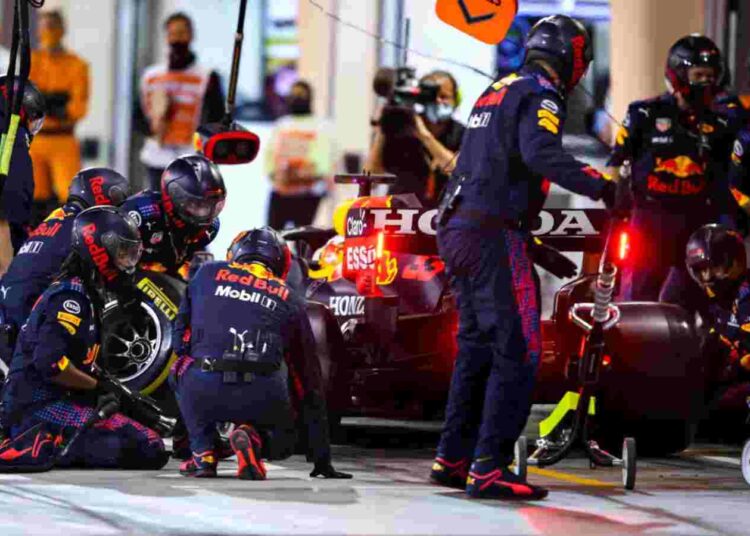 In Formula 1, every second counts. F1 teams spend millions of dollars to gain that extra tenth of a second. As such pit stops are a major aspect of the sport. Drivers can gain crucial seconds during tire changes and even gain or lose a position. Thus, teams put great effort into training the pit crew and ensuring to achieve that sub-2 second stop.

We have seen how Red Bull have become the champions of F1 pitstops. The Austrian team holds the record for the fastest pitstop ever with a time of just 1.82 seconds in Brazil in 2019. It is no surprise that Red Bull is a constant fighter at the top of the grid, with its efficiency in tire changes helping its drivers with strategic calls. But there is a less popular side of pitstops as well.

Often, teams would struggle to change the tires, resulting in a slow pitstop. This throws a spanner in the works for the driver as they as forced to regain the lost time on track. But there are some dismal instances, which are worse than the rest. Pitstops that had the viewers shaking their head and virtually ruined the race of the driver. We take a look at the longest stops in F1 history.

Starting this list is Scuderia Ferrari. Currently infamous for its alleged strategic errors, the Italian squad had a couple of slow pit stops during its Michael Schumacher era. Eddie Irvine was a championship contender in 1999. The 1999 European Grand Prix was held at the German Nuerburgring, a race that took place in changeable conditions. Irvine struggled on slicks and as the water on the track increased, The Ferrari driver headed into the pits for a switch from slicks to wet tyres.

However, the team was caught off-guard and the pit crew rushed to grab the wet tyres. Yet when Eddie Irvine got to the pits, only 3 tyres were ready, with the right-rear tyre missing. This was a disaster as the team frustrating took over 30 seconds to send Irvine back out on new tyres. Murray Walker perfectly described the situation, stating, “This is ludicrous.” A big incident of disorganization within Ferrari.

Esteban Tuero joined the F1 grid at the young age of 19 with Minardi. The Argentinian was hopeful to make his mark at the pinnacle of motorsport. However, Tuero faced a calamity during his home race in Buenos Aires. Esteban eventually retired from the race, but not before suffering from one of the slowest pit stops in Formula 1.

As Esteban Tuero made his way to the pits, the Minardi pit crew was unprepared to change the Argentinian’s tyres. The Italian team struggled to get things going while Teuro sat idle outside the garage. The pit crew haphazardly arranged the tyres and the fuel. A really slow change on the front-right caused Esteban to have a pitstop of over 42 seconds.

The Mercedes F1 team is considered one of the most efficient outfits in modern times. But that has not made the German squad invincible, making a couple of errors here and there. Who can forget the chaos at the Mercedes garage during the 2020 Sakhir Grand Prix? Yet the 2019 German Grand Prix beats the German race when it comes to the longest F1 pitstops.

Lewis Hamilton had gone off in the wet conditions during the race. Lewis managed to make his way into the pits with a broken front wing. The Mercedes pit crew had no time to react. The garage also had to decide if they were switching to a wet set of tyres. This confusion led to a pit stop of over 50 seconds, as the front wing was changed and Hamilton was sent out on a set of intermediates.

Scuderia Ferrari’s second entry in our list is the 2001 Malaysian Grand Prix. Rubens Barrichello had a great chance at winning the race. As the rain poured down, Ferrari decided to double stack Barrichello and Schumacher, and this is where disaster struck. Despite calling in both drivers, the pit crew did not have any tyres ready. This forced both drivers to stay in the pits while rivals went past on track.

This was a massive disappointment for the fans, as Rubens Barrichello was sent back out over a minute and 12 seconds after entering the pits. Schumacher too lost a lot of time. James Allen in the commentary box, compared this to Eddie Irvine’s stop in 1999. While Murray Walker referred to it as “Anything can happen in Formula 1 and it usually does. But I wouldn’t have expected this.” This costed Rubens to miss out on a potential race win.

Mercedes may have dominated the turbo hybrid era of the sport, however, the Silver Arrows hold a rather unwanted record. The record for the longest pit stop in history. This took place at the 2021 Monaco Grand Prix, when Valtteri Bottas was called in for a change of tyres. Although, rather shockingly, the pit crew was unable to change the front right tyre. the wheel nut simply did not come off.

This one-wheel nut led to the end of the race for Valtteri Bottas. With Mercedes having to retire the car, Bottas lost out on what seemed like a clear victory. The team only managed to take out this wheel nut with special equipment at the factory, 2 days after the race. Thus, this pit stop holds the record for the longest in Formula 1, with a time of 43 hours and 15 minutes. Certainly, a tough one to beat.

So there we have it, the longest stops at the pinnacle of motorsport which ruined the races for the drivers while highlighting the disorganization and miscommunication in the pitlane. Mercedes and Ferrari are some of the most successful teams in the sport, but manage to get 2 places each on this list. However, even Red Bull is not all perfect with the 2018 Monaco GP a sore memory in the minds of Daniel Ricciardo fans.

Pit stops play an integral part in Formula 1. Of course, teams will take risks to gain an edge over their rivals. Trying to gain a second in the stops can have a huge benefit in the race. But sometimes, this is what results in the downfall, a horrendous stop destroying the whole race. Quick pitstops are always the target for any team, but it requires proper organization and effective communication within the whole squad.