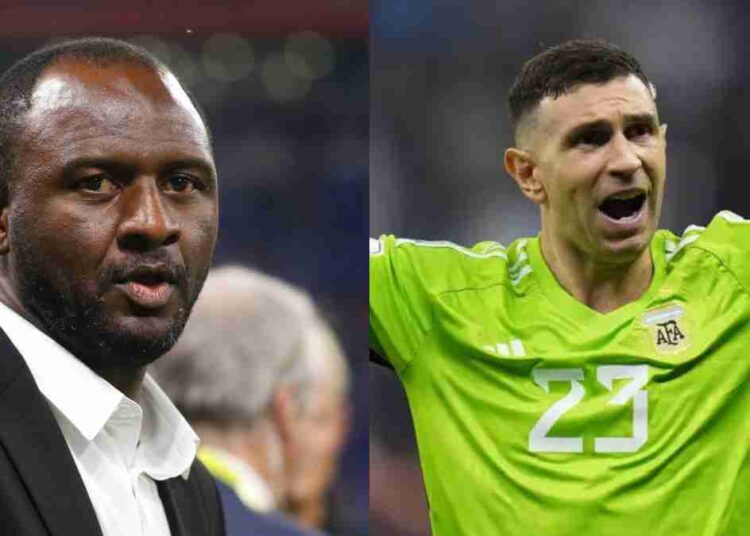 Crystal Palace manager Patrick Viera recently took a dig at the Argentina goalkeeper Emiliano Martinez. Martinez was head over heels after contributing a major part to the country’s victory. In the process, Emiliano Martinez took multiple shots at the France national team and Kylian Mbappe after winning the penalty shootouts against them.

Although, his overweening actions were the ones to reach the headlines faster after a rock-solid performance. Emiliano Martinez did his signature move as he received the golden glove award. He was then seen mocking Kylian Mbappe by holding a toy baby with the French winger’s face on it. Many fans including Patrick Viera have called out the goalkeeper for his behavior.

“Some of the pictures I Saw from the Argentinan goalkeeper, I think I take away a little bit what Argentina achieved at the World Cup,” Patrick Viera told in a press conference. “I don’t think they really needed that. You can’t control sometimes people’s emotional decisions. But that was a stupid decision, I think, from Martinez to do that“.the 1998 FIFA World Cup winner with France added.

Emiliano Martinez has proved to be a full package of sh*thousery as the Aston Villa keeper did not miss a single opportunity to throw an arrogant punch at the French. He saved the day for Argentina after making an almost impossible stop against French striker Randal Kolo at the very last minute. He went on to save Kingsley Coman‘s penalty to give Argentina the lead in the penalties.

Many fans believe that Emi Martinez went off the charts when he trolled Kylian Mbappe. The Frenchman scored thrice against the goalkeeper in a World Cup final and still got bashed. Martinez also announced a moment of silence for the player in the locker room after Argentina’s win.

The Argentina goalkeeper has been rock-solid in front of the goal ever since he made his debut for the senior team. Emi Martinez led his country through multiple knock-out stage penalty shootouts. He was one of the main reasons why Argentina won the Copa America trophy in 2021. The dynamic goalkeeper has been at the top of his form whenever he has the Argentina jersey on.

Martinez proved why he deserved to be in the World Cup squad after putting in extraordinary performances in this tournament. He joined Argentina’s national team in 2019 and has become one of the best keepers of their country already.

The Argentine hero would be back in action with Aston Villa next week. After his World Cup-winning campaign, it will be exciting to watch him play in the Premier League under Unai Emery. The coach had full support for his team’s number-one goalkeeper and awaited his return to the club’s training.

Also Read-French Sports Minister might discuss the “pitiful,” mocking of Kylian Mbappe with her Argentine counterpart

Read More-“We were not at the level,” Barcelona manager Xavi rates Pedri and Gavi higher than himself and Iniesta