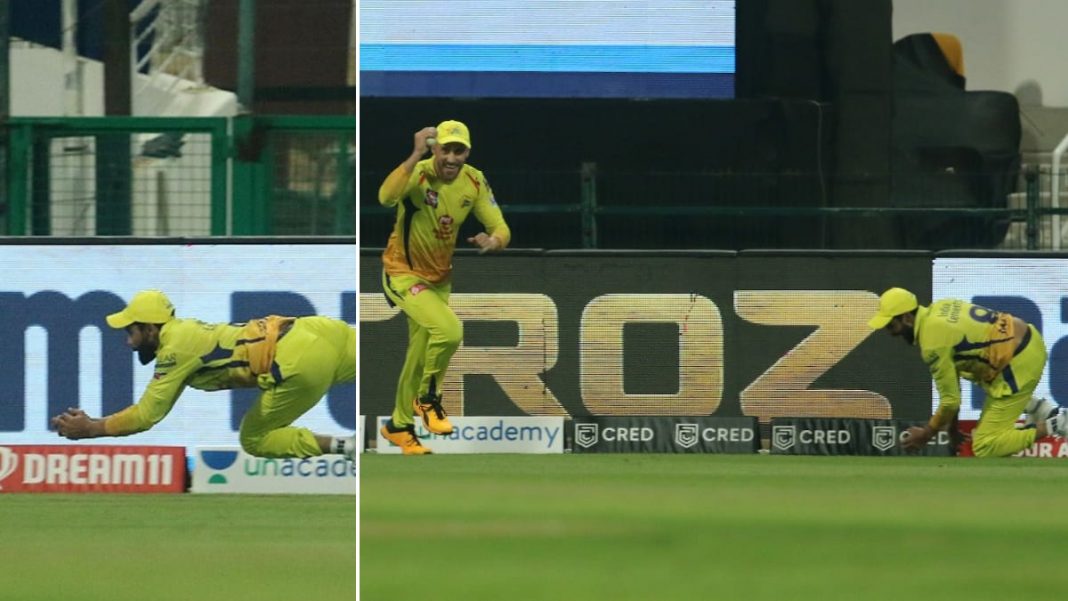 The 13th edition of the Indian Premier League (IPL) has already witnessed mesmerizing catches in the tournament so far. The creative brilliance of fielders is another aspect that enhances the fielding performances of the team.

This time the duo of Ravindra Jadeja and Faf Du Plessis joined hands and pulled out another stunning catch in IPL 2020.  Jadeja and Du Plessis are regarded as one of the best fielders in international cricket.  The pair showcased their class during the KKR vs CSK game and dismissed the dangerous-looking Sunil Narine.

The incident happened in the 11th over of the KKR innings, when Narine struck Karn Sharma for a big hit. But Jadeja was present at the boundary ropes and dived on his right-hand side and took the catch. However, Jadeja in motion was sliding and being very close to the boundary rope, lifted the ball to nearby standing Faf Du Plessis. Faf easily took the catch and Karn Sharma registered his second wicket of the game.

Rahul Tripathi was given the role of the opening batsman by Kolkata Knight Riders (KKR) after an impressive performance of 35 runs in the previous game. The right-hander did not disappoint and continued from where he left in the previous game. Tripathi made the top-scoring knock of 81 off 51 deliveries smashing 8 fours and 3 sixes in his innings. KKR with the help of his innings made a respectable score of 167/10 in 20 overs.

KKR will be hoping for their third win of the tournament against CSK. They won against SRH and RR but lost to MI and DC in IPL 2020.