The Petty family is the most successful racing family in NASCAR history. 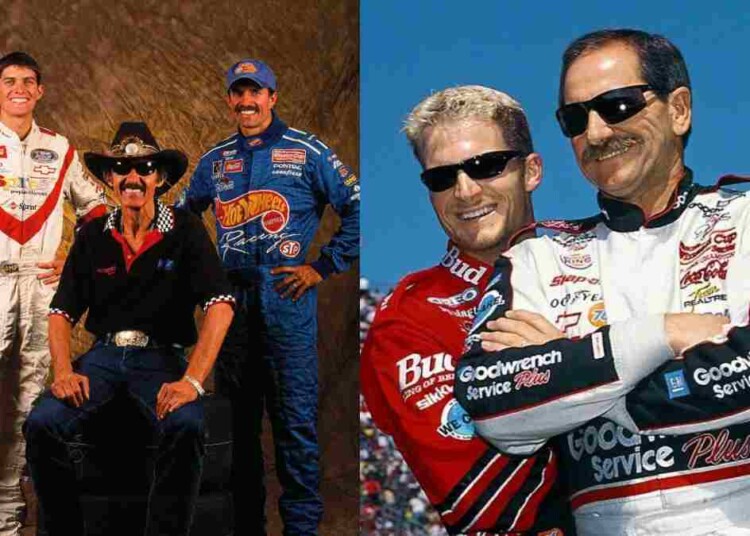 NASCAR is a sport with deep-rooted family values and involvement. The evaluation of the premier stock car racing scene in the United States came from “racing families” that gave everything for motorsports. Those families produced some of the greatest drivers and officials in the racing community.

Since the inception of NASCAR in 1948 under the visionary William France Sr. family-run teams have been a crucial part of the series organized. Some of the greatest NASCAR teams were born in some individual’s family garage. It is hard to measure the sacrifices made by these families in measuring greatness, yet here is a list of the top 5 most influential families of NASCAR.

In case you missed it: Who holds the record for most Road Course wins in NASCAR Cup History?

5. The Flock Family: The NASCAR Pioneers

The Flock Gang as they were famously known defined NASCAR’s humble beginning in the 1940s. The family produced four iconic drivers, who all are legends. Brothers Bob, Fonty, and Tim alongside their sister Ethel formed one of the most successful stock racing families. Ethel is a pioneer of a woman racing in NASCAR and is still one of the greatest female racers ever.

The most successful one of the Flocks has been Tim Flock (NHOF 2014). He won 3 impressive Cup titles in the 50s. Tim held the record for the greatest number of Cup race wins (19) until Richard Petty broke it in 1967. Fonty Flock won the 1947 National Championship Stock Car Racing Circuit and finished second in the first-ever cup season. Bob Flock is the least successful of the three but made some solid contributions while having an injury-prone career.

The Allison family is another motorsports family in NASCAR who are redefined racing. They dominated in the 1970s and 80s and produced moments fans still cherish. Brothers Bobby and Donnie Allison are among the Top 50 stock car drivers of all time. Bobby is in a NASCAR Hall of Famer, and Donnie is an International Motorsports Hall of Famer.

Bobby Allison is the most successful of the two. The 3 times Daytona 500 winner has won the 1983 Cup championship and 1980 IROC. He scored 85 cup race wins in his career. Donnie has 10 cup race wins and is notorious for the infield fight with Cale Yarborough in the 1979 Daytona 500 after a crash involving both brothers. It gave the sports narrative of the “tough man” battle.

The Earnhardt family is NASCAR, one of the most admired and respected. Dale Earnhardt and their son Dale Eranhardt Jr. are two of the greatest ever on and off track. Dale Sr. is a record 7 times cup champion, and the intimidator will always be in the OAT conversation regardless of time or era. Sr’s death following a tragic crash in the 2001 Daytona 500 paved the way for the modern-day safety standards NASCAR introduced.

Though he has never come close to his father on track Dale Jr. has made a legacy of his own, that ensured him a place in the NASCAR Hall Of Fame alongside his dad. He is a two times Xfinity series champion and has grown into the voice of fans now. The NBC analyst is now co-owner of JR Motorsports in the Xfinity Series, and they have plans for cup promotion.  Dale Sr’s father Ralph Earnhardt had a semi-successful racing career in the late 50s and 60. Sr’s older son Kerry Earnhardt was also a NASCAR driver, and Kerry’s son Jeffry Earnhardt now represents the family on track.

2. The Pettys: The winningest NASCAR family

NASCAR history is nothing if the Petty family is not in discussion. They have been one of the most influential and era-defining racing families in the US for more than half a century and still is NASCAR royalty.  Lee Petty, the Godfather of the petty Family started it all in the beginning. He is a 3 times cup series champion and a NASCAR Hall of Famer. Lee has scored over 54 cup race wins.

Richard Petty, the King, is the most successful driver in the cup series. The seven times cup champion won 200 cup races in his career. His track presence and charisma played a big role in making NASCAR a commercial success. After the Hall of Famer’s retirement his son Kyle took over the responsibility of expanding the family legacy. He had a respectful cup career.

1. The France family: The ones who started it all

It is blasphemy if the family that laid the foundation and made NASCAR what it is today isn’t the greatest family the sport has ever seen. Willaim France’s vision helped the sport to become an internationally acclaimed sporting event from moonshine runners showing off their racing skills on beaches.

Big Bill led NASCAR through the initial turmoil and established it as a commercially successful venture. Jim and Bill Jr. took over the sport after their father and helped it to grow to new heights. Brian France now leads NASCAR and embarks on a new journey to grow the sport even more.

The Waltrip family, The Wood family, The Jarretts, The Labonte family, The Bakers, The Wallace family, The Bodines, Richard Childress and family, The Gibbs family, and The Busch family are among the NASCAR families that deserve respect for their contribution to the sport.

“Still up in the air,” Jimmy Garoppolo is UNCERTAIN about his possible comeback to the 49ers for the Super Bowl

“The girls and gays would love this,” Fans react as Mick Schumacher outlasts a Swede in the ice bath