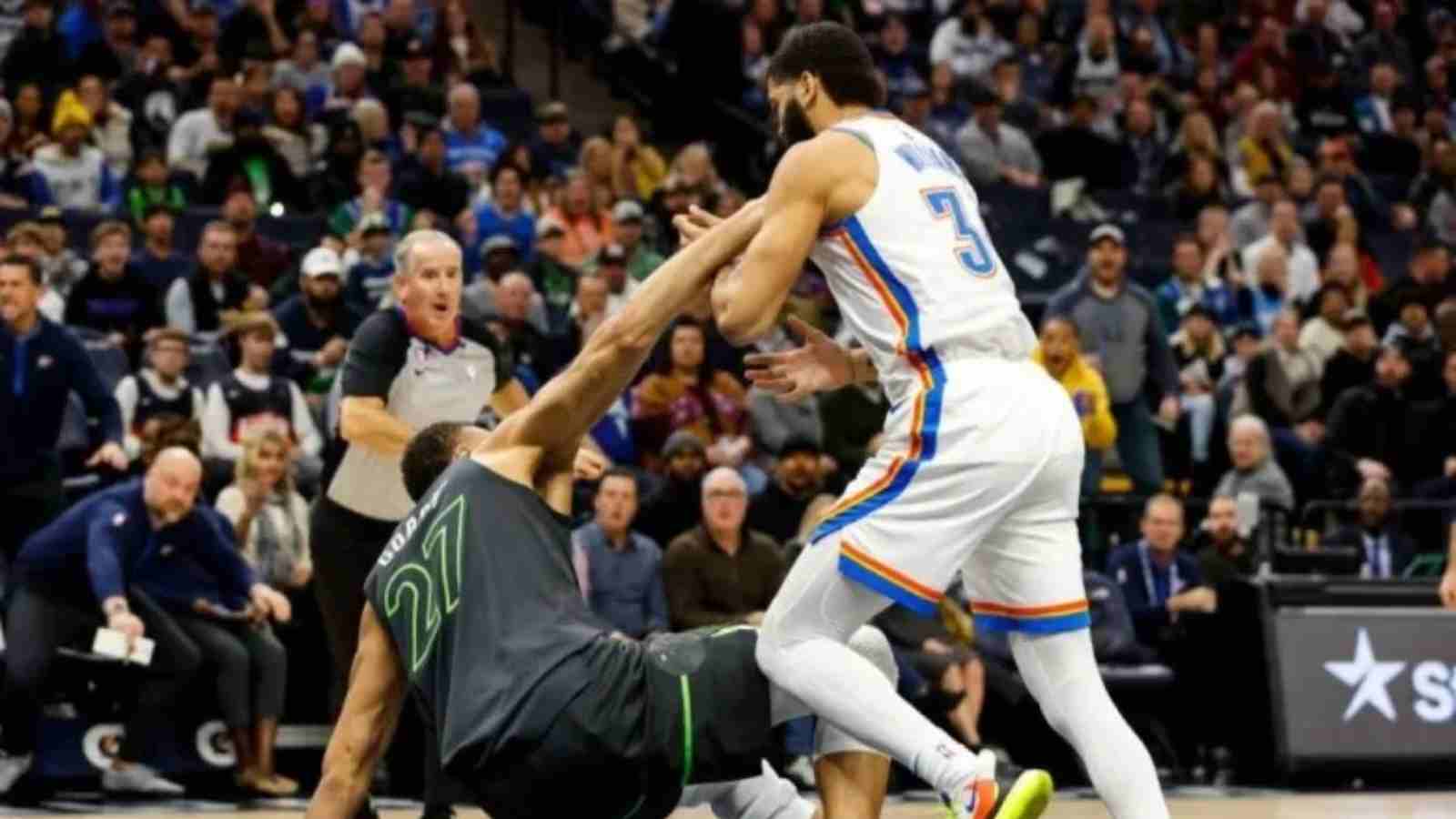 Minnesota Timberwolves center Rudy Gobert and OKC Thunder forward Kenrich Williams got into a scuffle during their contest in Target Center on Saturday. With 9.22 remaining on the clock in the second quarter, Williams, driving to the basket scored with a sinking floater over Gobert. Williams fell on the floor following his basket and things got chippy between the two players after that.

The play also took the big Frenchman on the floor as he tripped over the 6.6 ft OKC forward. As Kenrich was attempting to get up and get back for the play, Gobert tripped the OKC star. What followed was Gobert appeared to kick Williams even after tripping him and even hit him on the face. Williams soon got up and tried to push 7ft Rudy, who was seen struggling to get up.

As soon as the two players got into the scuffle, players and the officials rushed to separate the two parties involved.

The officials soon took a closer look at the play and after analyzing the play slapped Gobert with a flagrant-2 foul sending him out of the game. Williams was awarded a technical foul.

Rudy Gobert, Timberwolves fall short against the OKC Thunder in a high-scoring game

In a high-scoring game, Oklahoma City Thunder defeated Minnesota Timberwolves by 135-128. The Wolves were already shorthanded with Karl Anthony Towns being out for at least 6 weeks.

Rudy Gobert was ejected in the first half of the game, meaning that Wolvers were shorthanded on both sides of the floor.

On the other hand, Shai Gilgeous-Alexander scored game-high 33 points to lead the OKC to victory. The OKC star has been in the MVP conversation for his excellent performance in the first quarter of the season so far. Thunder had 6 players scoring in double digits, while the Wolves had four.   For Wolves, Anthony Edwards finished with 26 points while co-star D’Angelo Russell finished the game with 27 points.

It was the Timberwolves’ 12th loss of the season, they currently stand in the 11th spot in the Western Conference. Thunder registered their 10th win of the season and are placed in the 12th spot, right behind the Wolves.

Also Read: Jordan Poole Girlfriend: All you need to know about Kim Cruz

Rudy Gobert was ejected from the game against Thunder and fans can’t stop trolling him.

Fans were clearly not happy with Rudy Gobert kicking Williams on the play. What appeared to be a normal play and unintentional from Kenrich, many fans believe, the Frenchman had no reason to execute a foul play on the OKC star.

Slamming Gobert on the play, one of the fans wrote, “I can’t believe this guy has a 200 million dollar contract”, alluding to his max contract with the Wolves, which has so far not been capitalized by Minnesota. Another fan wrote, “Doesn’t Gobert know that usually you mature as you age”. Here are some of the reactions from the fans;

The Wolves lost the game to the Thunder by 7 points and Rudy Gobert finished the game with 6 points and four rebounds in 9 minutes of play. It was the 5th ejection of Gobert’s career.

Also Read: “What defense is this?” Fans react to AJ Griffin’s phenomenal buzzer beater for the Hawks to call game against the Raptors