Nick Wright feels Patrick Mahomes is way ahead of Jalen Hurts in the race for the NFL MVP award this season. 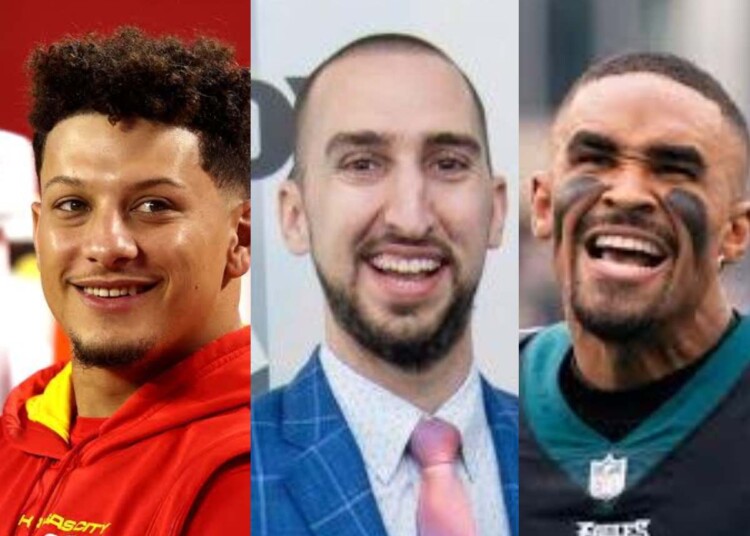 The 2022/23 NFL season is nearing its end, and with that, the debate for who should win the personal season awards has heated up. The NFL MVP award is given to the most valuable player throughout a season, with it being decided by a voting system.

For the current season, the race for the NFL MVP award seems to be a two-pronged one. Kansas City Chiefs quarterback Patrick Mahomes and Philadelphia Eagles quarterback Jalen Hurts are the two names that have topped most lists.

Patrick Mahomes has led the Chiefs to a 14-3 finish, the joint-best in the NFL, and has exceptional numbers to show for himself. The 27-year-old has a whopping 5,250 passing yards and 41 touchdown passes, both of which are league bests.

Jalen Hurts, on the other hand, has also led the Eagles to a 14-3 finish and has 3,701 passing yards with 22 touchdown passes. In terms of simple numbers, Mahomes has the upper hand. Mahomes’ record would also feel bigger given the fact that the Chiefs lost their superstar wide receiver Tyreek Hill before this season. While many had claimed that Patrick Mahomes would not be able to produce the goods without Hill’s services, he has actually flourished more this season.

Related: “It ripped my heart out,” Chiefs Travis Kelce breaks silence on ex-teammate Tyreek Hill’s controversial move to the Dolphins

NFL analyst Nick Wright also seems to be convinced that Mahomes should win the award for a second time in his career. Speaking on First Things First, Wright claimed that it would be a shocker if people still want to vote for Jalen Hurts. The analyst further claimed that Mahomes should become the unanimous winner of the award and those voting for Jalen Hurts should be stripped of their voting rights in the future.

Nick Wright said, “If Patrick Mahomes comes one vote shy of becoming the 3rd ever-unanimous MVP, it’s ludicrous. It’s the same thing that happened to LeBron in 2013. Mahomes in 2018 wasn’t even close to being unanimous. 9 people voted for Drew Brees. It was ludicrous. 2010 Tom Brady and 2019 Lamar Jackson, the only unanimous MVPs.

“I don’t, because it’s the same voters mostly. Whoever voted for Jalen for this award, which is indefensible at this point. If you wanted to argue he was the MVP on December 1st, you would have had the argument.”

“Now there’s no argument and still people just do it to be different. We need more churn in the voter pool and it needs to be certain little things, where it’s like you lose your vote,” Wright finished off in his argument on the show.

Now, it is only a matter of time before the winner would be announced during the 12th Annual NFL Honors on the 9th of February.

Related: “The breasts are mine,” Tom Brady’s rumored girlfriend Veronika Rajek makes a STUNNING revelation about her body

Related: “Go and get Lamar Jackson”- NFL Twitter has special request for Jets owner Woody Johnson after his vow to ‘throw money’ blindly for QB