World No. 9 Iga Swiatek is one of the brightest talents on the WTA Tour right now and the 20-year old Polish sensation continues to justify her tag with consistent performances across the surfaces. The Pole played only two tournaments during the Australian Open leg of the Tour, the WTA-500 Adelaide International and the 2022 Australian Open.

She reached the semi-finals of both the tournaments, losing to World No. 1 and eventual champion Ash Barty in Adelaide and then losing to eventual runner-up Danielle Collins in the first Grand Slam of the season. While the performances were certainly top-notch considering that she is still quite young, the Australian Open became extra special for the youngster.

Swiatek has openly been a lifelong fan of former World No. 1 Rafael Nadal who won the men’s singles title at the Australian Open and became the first man to win 21 majors. Iga was in the stands during the finals and the two players developed a good friendship during the fortnight at Melbourne Park having had a joint practice session in the last season as well.

While this was a dream come true for the young Pole, she recently revealed that the Spanish great even messaged her after she was defeated in the semi-finals of the Slam and the gesture was very inspirational and motivating for her personally.

“It took me by surprise, because he must have a very busy life. It was crazy to see that, yes, he can text someone like me (laughs). It showed me that he really has his feet on the ground. It was inspirational for me: I didn’t feel bad after my loss, because I knew that Danielle had played almost perfectly, but after that I felt really motivated.

“The day after the defeat, I just wanted to get back on the court, to work harder: I think Rafa’s message has a lot to do with it,” said Iga during a press conference at the 2022 Dubai Tennis Championships.

Iga Swiatek is the 6th seed in Dubai

Swiatek was up against Daria Kasatkina in the first round of the 2022 Dubai Tennis Championships and won the match 6-1, 6-2 to progress into the second round where she will now take on Jelena Ostapenko in a meeting of the former French Open champions with Ostapenko winning the Slam in 2017 while Iga won in 2020.

Also Read: “That is the price I’m willing to pay” Novak Djokovic ready to miss tournaments but won’t get vaccinated

“Players did not have much choice” British No. 1 Cameron Norrie gives insights into ATP’s decision to strip Wimbledon of its points 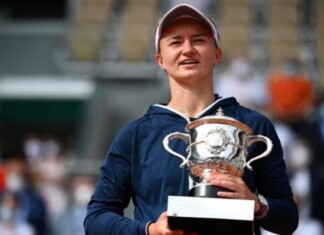