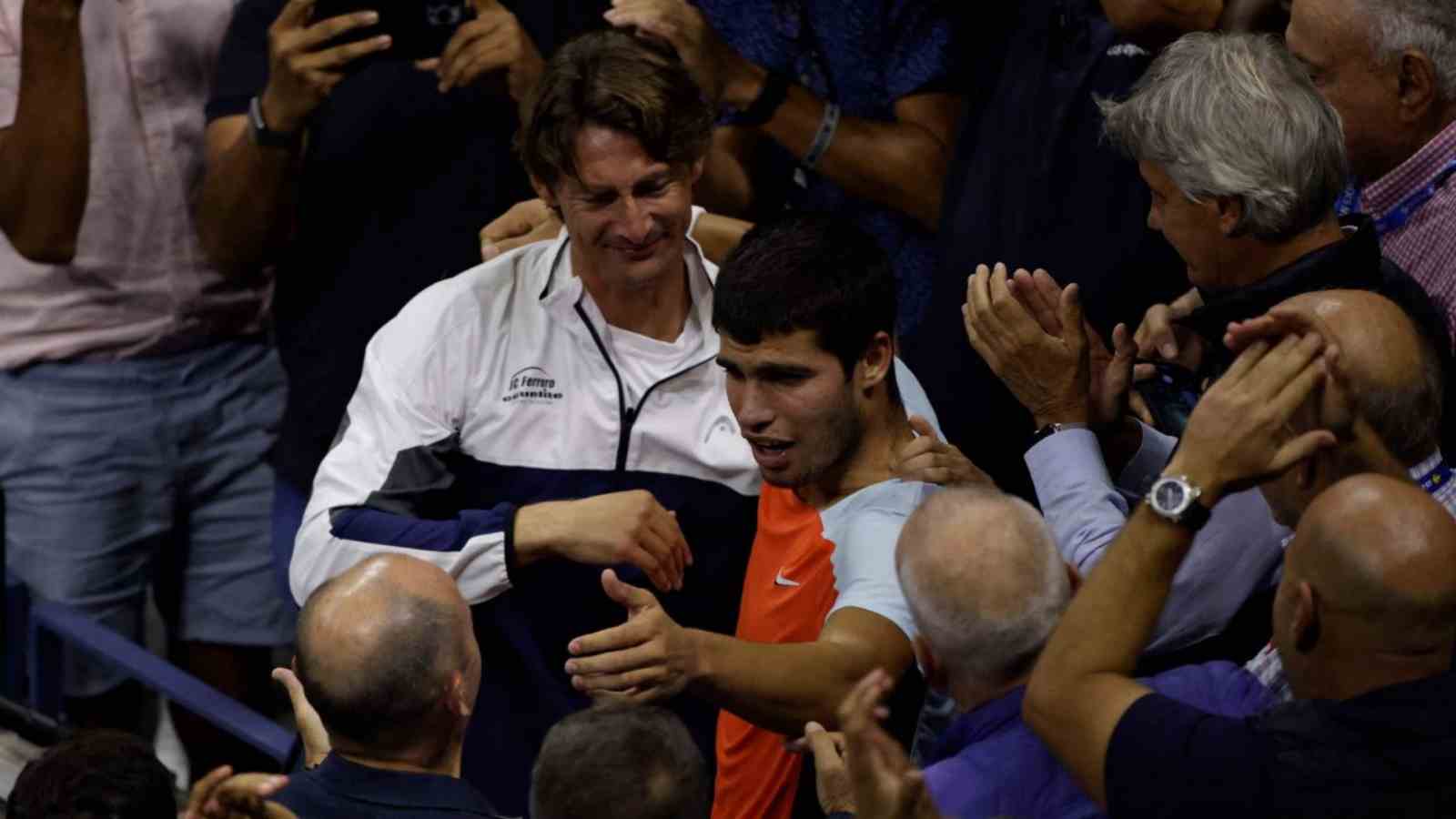 Carlos Alcaraz with his coach after winning the 2022 US Open trophy (Image Credit: Diario AS)

Spanish professional tennis sensation Carlos Alcaraz had an unbelievable season this year as he won one Grand Slam and two ATP 1000 titles in 2022. That’s not all, the tennis icon finished the year as the youngest World No.1 in the ATP rankings. Following such an incredible season, there is no denying the fact that the Spaniard lived up to all the expectations and hype surrounding him at the start of the year.

And that’s precisely why Juan Carlos Ferrero is a proud coach. In an exclusive interview with the sports channel Eurosport, he threw light on his relationship with the 19-year-old. As per Juan himself, Carlos Alcaraz is a “nice guy” and he is quite easy to work with.

“He’s like another son for me, the older one. He’s my second player as a coach and I think I keep learning from him and he’s learning from me. We’re both together growing up at the same time. He’s a very nice guy and it’s very easy to work with him,” he said.

Before agreeing to become the coach of Carlos Alcaraz, Ferrero worked with none other than German tennis player Alexander Zverev. However, unfortunately following a slew of issues between the two, the partnership worked for less than a year. It did not end on a positive note.

“What I know is I needed something like this because after working with Sascha [Zverev] that wasn’t that easy for me, it’s not the same culture, he understands a little bit differently [the meaning of] being professional, I needed to refresh a little bit and work with someone that was a little bit the same character as me and wanted the same things for the future and in Carlos, I think I found it,” he added further.

Carlos Alcaraz has worked his way to the top. Now, he has to play even better and win tournaments defeating the best on the tour to retain his crown as the World No. 1 ATP player.

What is Carlos Alcaraz up to in the off-season?

Tennis sensation Carlos Alcaraz celebrated his successful year on the court with his team. He became the youngest player in the history of the sport to become World No.1 in 2022. At an ATP event, he was awarded the ATP No.1 trophy.

“For me it’s a dream come true being No. 1 in the world, to be a Grand Slam champion,” Alcaraz told the ATP Tour. “I feel like the No. 1, to have this trophy, it means a lot to me,” he said in an interview given to the ATP Tour. He is trying to recover from a nasty muscle tear that he sustained in the semi-final match against Holger Rune at the Paris Masters 2022. His coach informed him that he is recovering well and will be fit soon.

Carlos Alcaraz will play at the Mubadala Tennis Championship exhibition event against either Andrey Rublev or Frances Tiafoe in Abu Dhabi. He will kickstart his 2023 season by participating in the Australian Open.

Also Read: Mats Wilander praises Novak Djokovic’s ‘Showmanship’ on the court calling the Serb “An animal on a tennis court”