Indian doubles specialist, Sania Mirza took a break from tennis years ago for the birth of her first child. After serving her motherly duties, she is eyeing a comeback ahead of the Tokyo Olympics.

Away from court, Mirza keeps her fans engaged via social media. She shares her views on various social issues and also gives an insight to her personal life. And one constant in her life is her son Izhaan. Recently, at the auspicious occasion of Eid, Sania shared some beautiful pictures of herself with Izhaan and her husband Shoaib Malik.

Recently, Sania was seen hitting the ball with her son Izhaan. Her father, Imran Mirza posted a video of the mother-son duo practicing on court. “I could be in serious danger of losing my coaching job to this ‘new kid on the block’!” Imran Mirza posted on Instagram. The short video features the little boy handing his mother tennis balls during her practice session.

On professional front, Sania is one of India’s greatest tennis player. She retired from Singles in 2013 and has been phenomenal in doubles since then. Her breakthrough year was 2014, where she won the US Open Mixed Doubles title with Brazil’s Bruno Soares, before clinching gold (Mixed Doubles) and bronze (Women’s Doubles) at the Asian Games in Incheon. She was also the Doubles World No.1 for majority of 2015 and 2016.

She returned to the WTA tour again in 2021 after serving her motherly duties and recovering from COVID-19. She partnered with Andreja Klepac of Slovenia at the Qatar Open in March but lost her second match on return. Mirza booked the Tokyo Olympic berth via Special Rankings. She bowed out of the semi-finals at Rio 2016 partnering Rohan Bopanna and lost the bronze medal match too to finish 4th. She will like to go a step ahead in Tokyo this year. 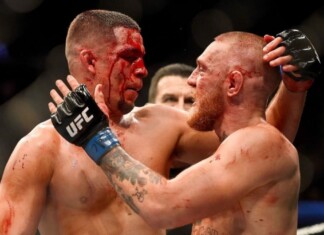 Prateek Athanur - June 17, 2021
Nate Diaz finally made his comeback to the octagon at UFC 263 last weekend. After the fight there has been a lot of speculations...