Kai Kara France is not a fan of Cody Garbrandt’s antics in the UFC 269 press conference.

UFC flyweight Kai Kara France is posed with an interesting challenge at the final pay-per-view event of 2021 for the UFC. UFC 269 sees former bantamweight champion Cody Garbrandt drop down to the flyweight division to face Kara-France. Both the fighters have displayed some of the most excellent fightings inside the octagon and are looking forward to putting on a show at the T-Mobile Arena in Las Vegas, Nevada.

In a very exciting press conference day ahead of UFC 269, the Kiwi fighter did not get the attention he expected from his opponent as bantamweight star Sean O’Malley got Garbrandt’s attention over some intense trash talk. The flyweight fighter thought it is important to remind the former bantamweight champion he is not someone to be slept on.

After the press conference ended, Kara-France took to Twitter to post about his thoughts on his opponent. “Don’t worry bout Sean, worry bout me!” wrote Kai on his Twitter account posting a picture of the two fighters facing off for the first time. The fighter from Auckland, New Zealand is not wrong either as Cody will be facing an animal in Kara-France this weekend inside the octagon.

Kai is coming off a stunning win against Rogerio Bontorin at UFC 259. The Kiwi fighter TKO’d his opponent in the very first round to bounce back from his loss in 2020. “Don’t blink” has a record of 22-9 in his professional career and is 5-2 in the UFC. 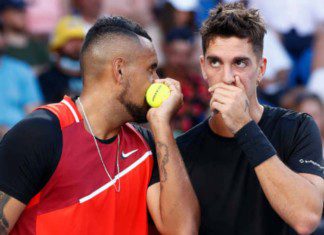 T Rushitha - January 24, 2022
Nick Kyrgios and Thanasi Kokkinakis staged a massive upset against 1st seeded duo of Nikola Mektic and Mate Pavic in the second round of...