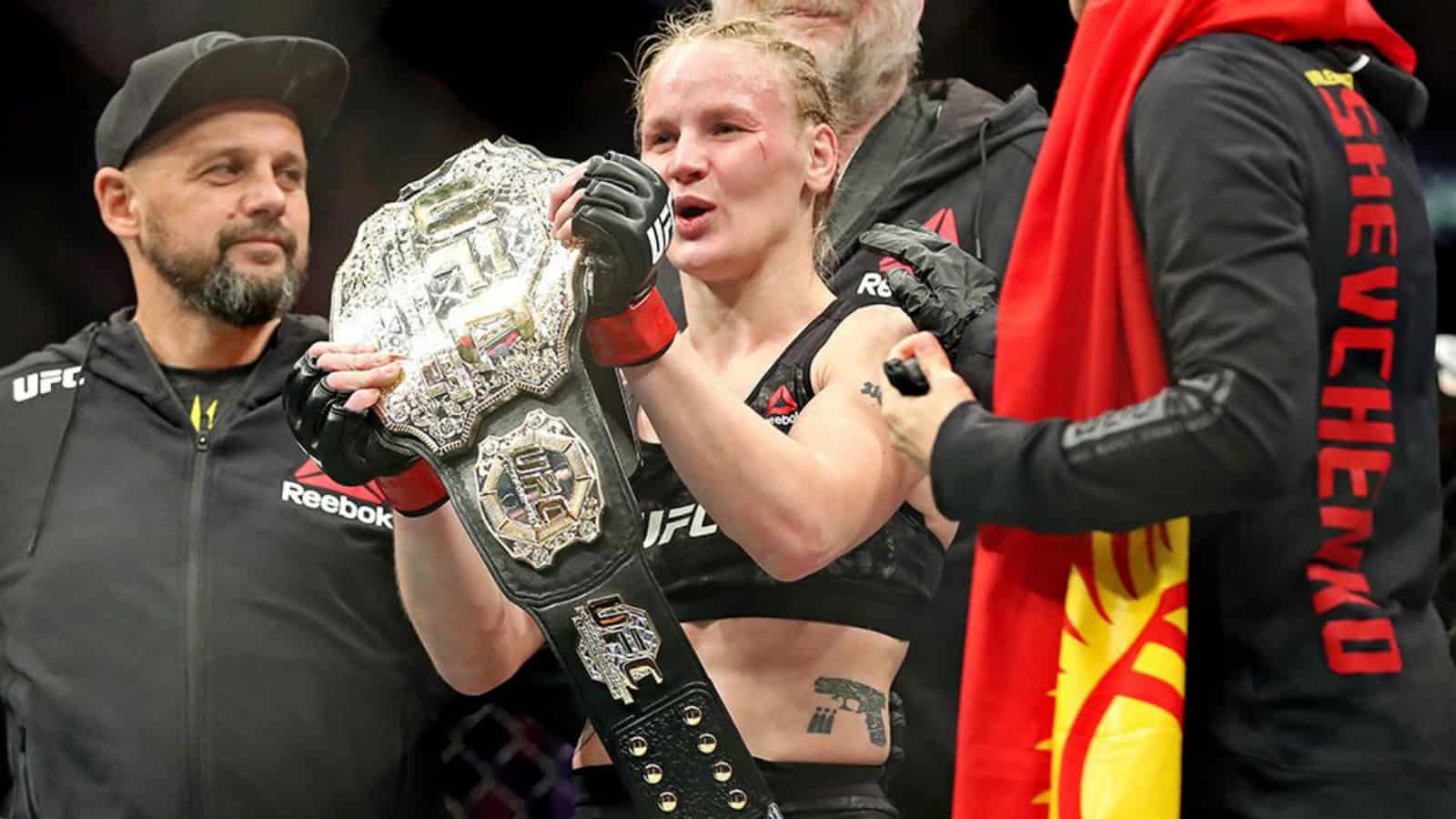 The UFC women’s Flyweight champion Valentina Shevchenko is one of the most dominating UFC champions ever. She is single-handedly ruling the entire division and no one seems to take the belt for her anytime soon. Let’s have a look at the top 5 greatest performances of Valentina Shevchenko in UFC history to honor her legacy.

Shevchenko made her UFC debut against Sarah Kaufman on UFC on Fox: Dos Anjos vs Cerrone 2 and faced the most dominating woman in UFC history, Amanda Nunes in her very second fight. Although she lost that fight by unanimous decision but this made her even stronger.

She challenged Amanda Nunes again at UFC 215 and this she took the champ into really deep waters. In the end, she faced a loss by a controversial split decision, that many people consider as a robbery. Following this Shevchenko returned to Flyweight and defeated the champion Joanna Jedrzejczyk to wrap the UFC title around her waist.

Since then she has defended her title five times and no one seems to come even closer to defeat her. Now, to discuss more, let’s have a look at the top 5 greatest performances of Valentina Shevchenko in UFC history.

With this win, she defended her title for the fifth time and this performance lands on our list on the number five spot of Top 5 greatest performances of Valentina Shevchenko.

Valentina Shevchenko entered in the first main event of her UFC career to face the former UFC women’s Bantamweight champion, Holly Holm. Holm came into this fight after losing her title to Miesha Tate on UFC 196 and Shevchenko with a loss against Amanda Nunes in her last fight.

The stakes are high for both the women entering into this fight and they produced an absolute war for five rounds. In the end, Valentina Shevchenko emerged victorious in this fight by the unanimous decision of the judges and stamped her authority in the division.

This performance of ‘Bullet Valentina’ lands on number 4 in our list of Top 5 greatest performances of Valentina Shevchenko.

Shevchenko faced the most dominating woman in MMA history, Amanda Nunes in her very second fight in the UFC. She came into this fight with a split decision win against Sarah Kaufman on her debut and the winner of this fight was booked to face Miesha Tate for the UFC women’s Bantamweight title.

Nunes and Shevchenko tore each other apart for three rounds but in the end, due to her excellent takedown attacks, Amanda Nunes won this fight by unanimous decision of the judges. Although Shevchenko lost this fight but her performance was phenomenal, that’s why we ranked it on number three in our list of Top 5 greatest performances of Valentina Shevchenko.

Valentina Shevchenko returned to the UFC women’s Flyweight division at UFC 231 to challenge Joanna Jedrzejczyk for her vacant title. The Flyweight title was stripped from Nicco Montano after she faced a terrible weight cut.

Jedrzejczyk was considered one of the toughest challenges for Shevchenko as she is one of the most elite strikers on the UFC roster. After five rounds of absolute carnage, ‘Bullet Valentina’ won the fight and UFC women’s Flyweight title by unanimous decision of the judges.

Since then she has defended her title five times and this performance ranks number two in our list of greatest performances of Valentina Shevchenko.

The rematch against Amanda Nunes was no doubt one of the biggest fights of Shevchenko’s career. After facing a loss in the first one, ‘Bullet Valentina’ wanted to left no-lose threads in this fight. They faced each other in the main event of UFC 215 for five rounds of war.

This time Shevchenko took the champ into deep waters and Nunes hasn’t been seen struggling this much ever. But in the end, Amanda Nunes won the fight by a controversial split decision that many people until now consider a robbery.

Shubham Bajpai - May 16, 2022
Lewis Hamilton was spotted enjoying Post Malone's release of his new song "Love/Hate Letter to Alcohol" on SNL. The singer gave a little teaser ahead...