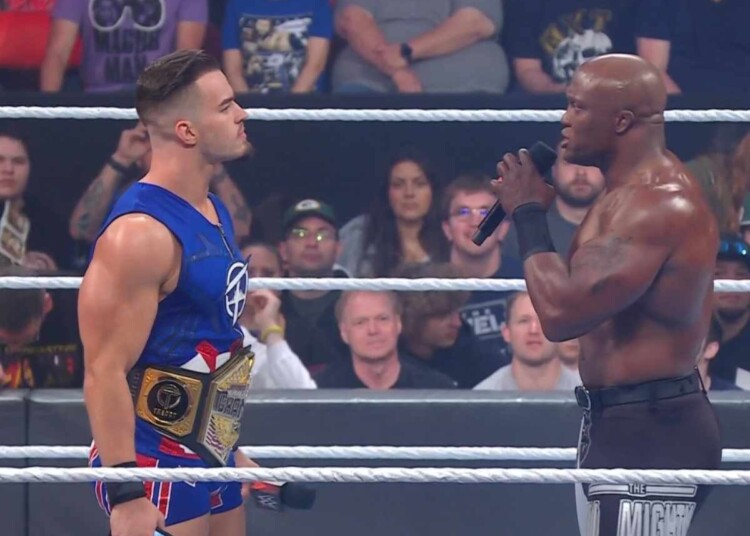 Austin Theory has risen to the ranks of WWE faster than any other of his contemporaries. The 25-year-old is already a two-time United States champion and a former Money in the Bank holder. The young superstar is all set to defend his US title against Bobby Lashley on the next week’s episode of Raw. Theory seems confident going into the match as he made a bold statement directed at his opponent.

WWE’s Twitter account posted the match graphic for the US title at the next week’s 30th-anniversary show of Monday Night Raw. Austin Theory quoted the tweet and, while referring to Lashley, said, “I put you in your rightful place ‘The Past’”.

Bobby Lashley won the six-pack elimination match on the latest episode of Raw to earn a shot at the US title. Lashley is a former three-time United States champion and he has been feuding with either Rollins or Theory since July last year. However, the last time these two fought in a singles match was back in August at SummerSlam. They also had a triple threat match at Survivor Series with Rollins added in the mix. If Theory successfully defends his title next week, it will be his first win against the Almighty in a singles competition.

Related: WATCH: Seth Rollins throws a trash can at Austin Theory after returning from injury

What are the WrestleMania plans for Bobby Lashley and Austin Theory?

As WrestleMania is just months away, reports and rumors start making rounds on the internet about potential feuds for superstars. That is also the case for the two of the top superstars of Monday Nights. Austin Theory is currently rumored to have a match against one of the biggest names in the company, John Cena at the show of shows. Whether this will be a United States title match or a straight-up singles action remains to be seen. As per Fightful, Cena has already filmed a segment with the current US champion when he returned at the last SmackDown of 2022.

Bobby Lashley is also going to have a big match at the grandest stage of them all against another returning superstar if the rumors are to be believed. Lashley might finally get his Crown Jewel rematch against the Beast Incarnate, Brock Lesnar at the two-night event. The Almighty is currently in the storyline of reforming the Hurt Business with MVP, Cedric Alexander, and Shelton Benjamin. The fans have high hopes for the group and Lashley in particular as WrestleMania inches closer and closer.