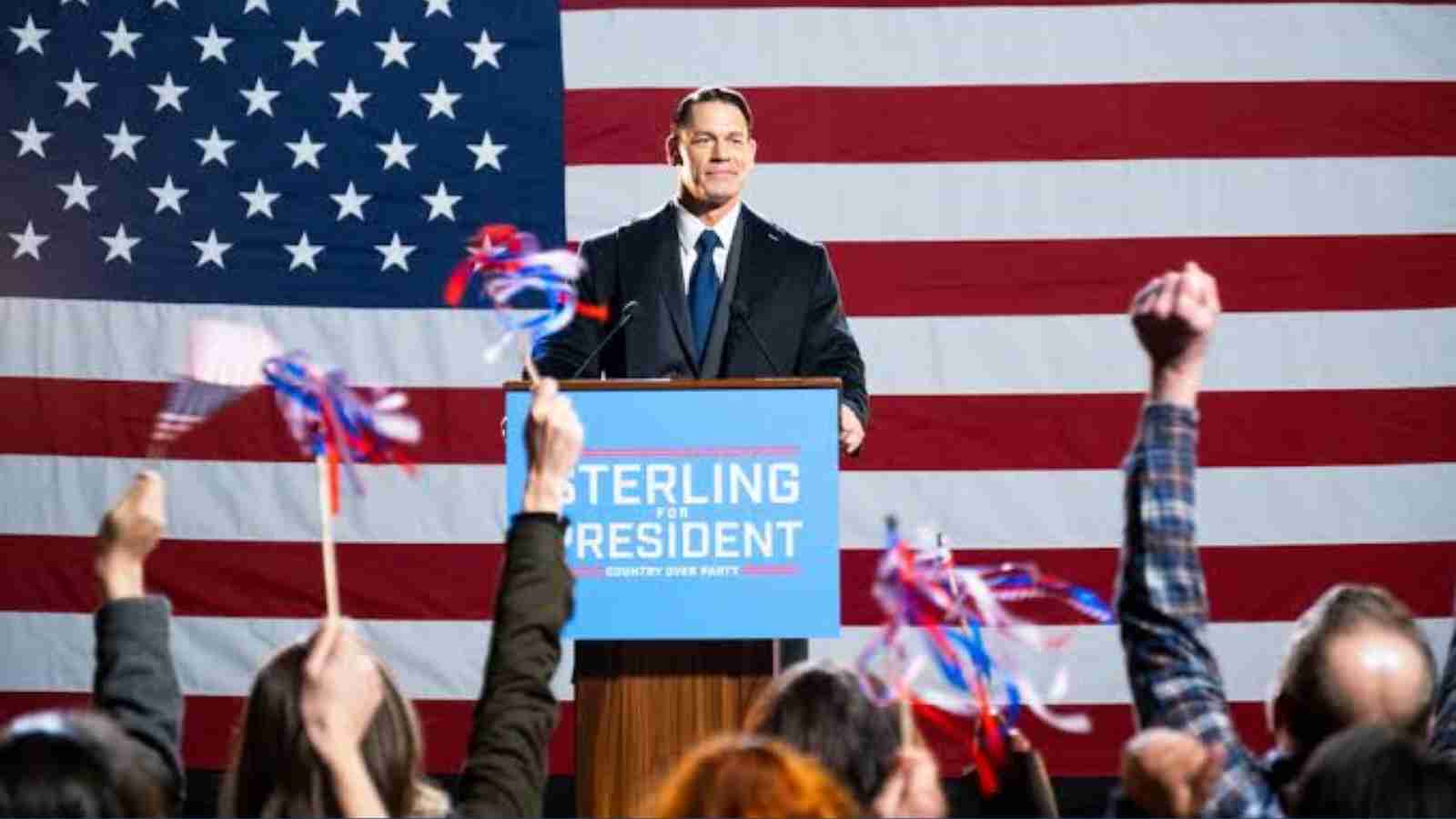 The first look of the movie showed John Cena as an independent candidate running for the post of the President in the United States. (Image Credits - Discussing Films On Twitter)

John Cena is undoubtedly one of the most influential figures of the pro wrestling industry of all time. After transitioning from a decorated wrestling career to a well established name in the showbiz industry, fans now want the Peacemaker star to run for the highest office in the state, the President.

Recently the first look for Cena’s upcoming venture “The Independent” was unveiled and the former WWE Champion is seen playing the role of an independent candidate running for the post of the President of the United States without much of a political backing and the things unfolding around him.

The film is all set to premiere on the American streaming platform Peacock from November 2.One of the first look images from the movie showed John Cena delivering speech from a pedestal with US Flag in the background and the people cheering him.

After this fans on Twitter started demanding that the former 16-time world champion should consider himself running for the post in real life as well. The fans made their demands public to see John Cena as the President on the micro-blogging website.

Some appeared shocked that they would’ve never imagined the WWE star in the role of a president while some considered Cena as the perfect fit for the role. Some also said that if The Rock could run for it then why not Cena. The wrestling Marvel’s fans were quick to say that even if they’re not a big fan of political dramas they would just watch it for Cena.

ALSO READ: “Monkey CENA” Twitter Users Compare A Monkey to John Cena after The Former Body Slams a Man like The WWE Legend

Ever Since Dwayne “The Rock” Johnson was seen running for the post of President in the critically acclaimed show Young Rock, fans had demanded “The People’s Champ” to run for the post in US. But the “Black Adam” star has made it clear that he is in no mood to get into the political atmosphere as of now.

The career graphs Johnson and Cena are pretty much similar after the latter has also followed the footsteps of his former rival in WWE. John Cena has also admitted on multiple occasions that Johnson has helped him a lot to prepare for the showbiz industry which otherwise could have been a tough ride for him. Notably, Johnson is also being rumoured to appear at WrestleMania 39.

Both the stars have been part of the Fast and Furious franchise, and now the DC Universe as well as Cena debuted as The Peacemaker some time ago and Johnson has recently joined the party with Black Adam.

However, it now needs to be seen how the latest venture for Cena “The Independent” fares at the streaming platform Peacock. The political drama also stars Luke Kirby, Brian Cox, Ann Dowd, and Jodie Turner-Smith along with Cena in major roles.

ALSO READ: “We’ll let that all reveal itself in time” Becky Lynch keeps her plans a surprise for the WWE Universe