Rose was a part of the NXT roster for a brief period of time – and made her main roster debut in 2017. Primarily, Rose was a part of the Tag Team division and she, along with Sonya Deville were known as Fire and Desire. The Tag Team ultimately came to an end and they feuded against one another in a Loser Leaves WWE match – where Rose emerged victorious.

Since then, Mandy Rose started teaming up with Dana Brooke – but her run up to that point wasn’t quite impressive. Things turned up when Rose was moved from the main roster to NXT! She has been receiving massive push in the third brand of WWE, and currently holds the NXT Women’s Championship.

This is not all. She has her own stable named Toxic Attraction which features – Gigi Dolin and Jacy Jayne. This is an all-Champion stable with Dolin and Jayne currently holding the NXT Women’s Tag Team Championship. The NXT Women’s Champion recently appeared for an interview with BT Sport where she described her current run with the colorful brand.

“Yeah, I feel like when I look back in those times, I have come a long way. And, I feel like it’s just like, not even just in-ring ability, it’s just like, when you kind of get that opportunity and that little bit of I don’t want to say, but like a push, you know. You get some spotlight,” mentioned Rose.

Since debuting on NXT, Mandy Rose has debuted a new look as well – and has been performing on a whole new level ever since. She pinned Raquel Gonzalez in a Trick or Street Fight at Halloween Havoc in October, to become the NXT Women’s Champion. Interestingly, her Toxic Attraction stablemates had won the Tag Team title on the same night.

As the Champion, Mandy Rose has managed to defend her title on several occasions. Most recently, at New Year’s Evil – Rose defeated Raquel Gonzalez and Cora Jade in a Triple Threat match to continue her reign as the Champion.

Also Read: Why Bianca Belair is the best challenger for Becky Lynch? 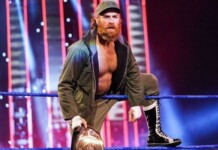 “I wouldn’t be here without him”; Kevin Owens opens up on Triple H’s retirement and health issues

BREAKING: WWE set to compete with Dwayne Johnson sitcom by the end of the year