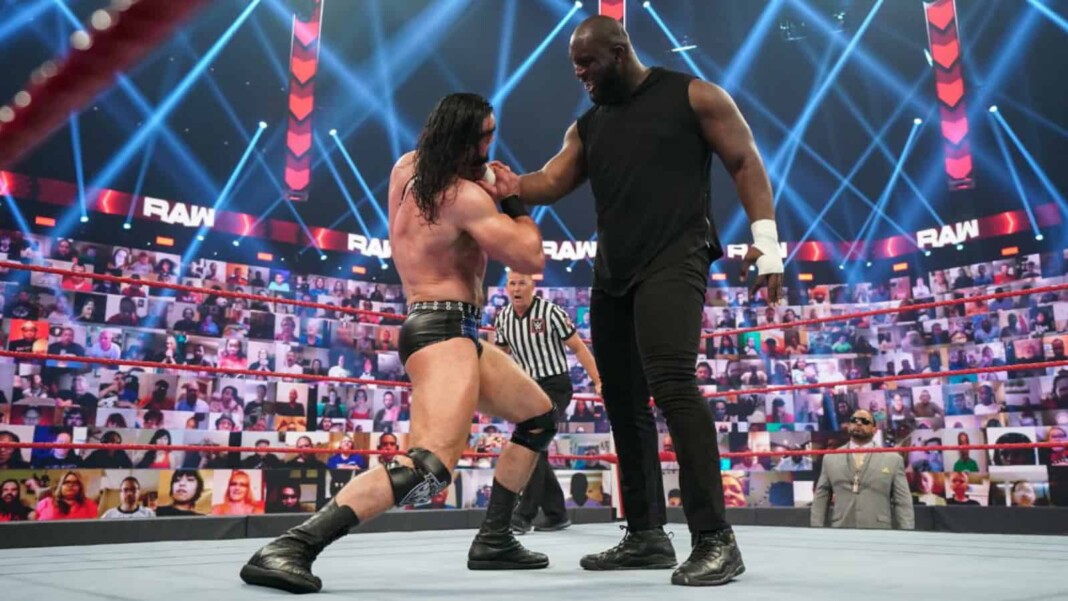 The latest episode of WWE RAW was an action-packed one that included a lot of staggering individual performances. From Jeff Hardy saving his career to Drew McIntyre beating AJ Styles, the matches were hard to miss for the viewers. Even fans are eagerly waiting for this week WWE RAW Results as Hell In A cell is near.

Charlotte started the match with a cross down but Rhea Ripley walks out. Charlotte gets distracted by Ripley’s arrival and Nikki tried taking advantage but without any significant effect. Charlotte responds by throwing Nikki out of the ring. The Queen goes on further to slam Nikki on the barricade and then kicking her on the chest. Flair gets back into the ring after some well-appled punishment to her opponent.

Charlotte grinds Cross down with a submission on Nikki as Nikki watches on from the ringside. Cross fights up and catches the Queen with a tilt-a-whirl cradle for a two-count. Charlotte chokes Cross on the middle rope and chops her in the corner. Flair sets Cross on the top rope but gets punched backward, which gives Nikki to grab her for a tornado DDT. As Charlotte rolls outside the ring, Cross goes to the apron and dives at Charlotte only to get caught by the latter. Charlotte blows Rhea a kiss before hitting a fallaway slam. Charlotte poses at ringside and stares at Ripley, failing to keep track of the referee’s count. Cross manages to roll inside intelligently and Flair doesn’t realize until she is counted out.

John starts off proceedings by rushing Hardy in the opening but Hardy quickly recovers and forces him back into the corner and hits back with blows of his own. Morrison was equal to the challenge and follows up with a capoeira clothesline. Cedric Alexander comes out and Morrison stares at him before restoring his attention to his opponent for the night. Morrison hits Jeff and leap frogs him but Hardy hits a leg drop for a two-count.

Hardy gets whipped to the corner but does well to apply a Whisper In The Wind for a near-fall. Hardy moves to the apron and drags John out with him. Morrison slams Hardy into the ring and earns the victory in wwe raw with a nicely executed Starship Pain.

The match had its condition in place and Hardy has to retire if he loses. Jeff knocks Cedric out of the ring and dropkicks him through the ropes. Hardy puts Cedric back inside but faces a dragon Crew from the latter. Alexander goes to assault Hardy’s knee with submissions and stomps. Hardy rallies and hits a dropkick in the corner. Hardy tries his luck to apply the Twist of Fate but Alexander counters with a Michinoku driver. Hardy kicks out.

Alexander goes up top and fails in his attempt to deliver a Swanton Bomb as Hardy moves out. Hardy misses Twist of Fate again and Alexander counters. Jeff avoids a handspring kick, then hits a Twist of Fate, followed by the Swanton Bomb for the win in wwe raw which extends his career for good.

The bell rings and the unknown woman knocks Naomi down. Naomi fights back but her blows did not cause any effect. The new superstar applies a power slam followed by a senton. Naomi is hit by a running crossbody and grounded with a Michinoku Driver and it was all over.

Riddle gets things underway with Woods and the latter manages to get Randy’s partner trapped between he and Kofi. Riddle manages to jump on him with the Bromission but Woods tags Kofi in. They hit an atomic drop onto a knee, then a wristlock/double stomp. New Day continue to humiliate Riddle with their team-work. Riddle, who is isolated, tries to fight back but Woods hits an arm-drag and takes locks in a submission.

Riddle somehow manages to catch a kick and drags Woods to the corner and Randy tags in. Orton and Woods lock up and Randy takes a headlock. Kofi gets the chance after Woods tag him in and instantly applies a springboard crossbody and a two-count. Kofi hits a dropkick off the middle ropes to take the Viper outside. Riddle goes for the savior act but Woods suplexes him outside. Riddle hits a gnarly leaping knee to Woods against the ropes, then tags the Legend Killer. Orton and Riddle combine well to apply the pressure on Woods. Riddle looks for an armbar but Woods rolls him over. Orton tags in and stomps Woods over and over.

Woods fights back and lets Kofi in. Kofi wastes no time with a springboard chop, knocks Riddle off the apron. After some serious action unfolding in the ring Orton ducks trouble of paradise and tags Riddle in. Riddle follows up with a flying forearm and a Penalty Kick, then a ripcord knee. The moves were further followed by a Floating Bro but Kofi kicks out. Woods superplexes Riddle and Kofi hits a frog splash for a near-fall but Orton was not over. Riddle, after getting the tag, rolls up Kofi for a near-fall, then hits a Pele kick. Woods tags in only to receive an under hook suplex. Randy tags in and hits a powerbomb. Orton goes for the draping DDT but Kofi holds Woods on the apron, then Xavier hits an enziguiri.

Riddle is in and tries to German suplex Woods inside but Xavier slides in and gets him up on his shoulders and Kofi hits a double stomp to Riddle on the shoulders. Kofi comes off the top rope and Riddle catches him with a knee. Orton tags in but gets rolled up for a two. Woods kicks Orton and attempts a rolling clothesline but finds himself at the receiving end of an RKO. Tat was RK-BRO for the win.

Rhea overpowers Asuka but gets shot off and the Empress jumps over her. Asuka rolls-up Ripley for a two-count. Followed it with some boots and attempts a clothesline with no end product. Ripley headbutts Asuka and looks to Irish whip her but the latter applies a Balck Widow submission. Ripley somehow jumps onto her back to crush Asuka and get rid of the submission. Rhea lands a few short-arm clotheslines, then whips her to the corner and wants a dropkick but nobody’s home. Asuka kicks her and looks for another but Ripley slams her face on the barricade aftervgetting up on the Electric Chair.

Asuka hits a dropkick but Ripley fires back with a double kick of her own. Rhea puts Asuka on the top rope, punches her, but gets floored and hit with a missile dropkick. Asuka makes the Champion suffer from a pop-up knee and a two-count, then a hip attack. A German suplex followed and a sliding knee for a two-count again. Asuka then misses a spinning back fist and Ripley gets the win with a Riptide.

Nia rushes Bliss but Alexa fights back with some kicks. Bliss does a weird crawl that seems to be her version of the crab walk. Nia tosses Bliss across the ring and follows-up with a splash in the corner. A submission is then applied by Nia. Bliss struggles free herself and slaps Jax before running into a clothesline. Nia tries the leg drop but Bliss sits up to avoid it. Alexa after a kick to the head goes up top. Reginald appears on the apron to distract Alexa but she still manages to hit Jax with a DDT. Alexa screams before going up top and hitting Twisted Bliss. Reginald runs in and prevents Alexa from the count. Bliss gets the win via disqualification.

The bell rings and Elias runs across the ring and hits Ryker with a big knee. Elias beats Ryker around the ring and catches him with a back elbow. Ryker scomes back with moves of his own and hits a kitchen sink knee. Ryker gets Elias in the corner and chops him but gets the same in return. Ryker hits a spinebuster, then tosses Elias over the ropes. Elias esacapes and Ryker gets the win.

AJ forces Drew to the corner with a shoulder tackle as Lashley watches on. AJ chops the Scot but Drew counters with a massive back body drop. McIntyre hits a backslide followed by a Future Shock DDT but instead of covering he turns to flip Lashley off. Omos pulls AJ from the ring and Lashley stomps down to the ring. The Viking Raiders appears and it seems this match might become a six-man.

It remains a one-on-one. Drew and Styles are trading and AJ manages to lift and drop him on the top rope. Drew gets on the apron and Styles tries to suplex him inside but the big man restores his confidence with punches. McIntyre whips him to the corner and AJ goes to a neck crank. McIntyre tries to fight back but Styles jumps onto him with a sleeper. Drew escapes somehow and drops AJ with a big lariat. More clotheslines from both men follow. Styles avoids a superplex and lands an Ushigoroshi for a near-fall.

Drew dumps AJ to the outside and goes out to bring him back in but instead punches Lashley and tosses him into the barricade. McIntyre continues the assault but Lashley storms the ring and beats Drew. Raiders interrupt the proceedings to save Lashley’s challenger. McIntyre wins via disqualification.

Things get started with Styles and Erik. Erik knees AJ and puts him in the corner to tag Ivar, who immediately tags Erik back in so they can do a double-team body slam. Lashley could not control his anger and pulls McIntyre off the apron to toss him into the barricade. Lashley tags in and beats Erik down in the corner, then tags AJ continues the domination. Ivar eventually gets the tag to rolls voer Lashley’s back but the Champion applies a spinebuster. Styles comes back but Drew takes him out. then Lashley hits a belly-to-belly suplex and Drew is floored. Omos tags himself in to drop Ivar with a shoulder.

The Viking tries to attack but Lashley takes him down with a single leg. Lashley beats Ivar in the corner, then tags Omos for a running back elbow and he tags Styles. Ivar catches AJ with a double stomp and both men are down. Tags made to Omos and McIntyre. Omos grabs Drew by the throat and McIntyre kicks him off. Styles tags in and looks for the Phenomenal Forearm but Drew avoids it and shows no mercy with three belly-to-bellies. Omos cheap-shots McIntyre as Lashley distracts the referee. Then the Champion drops off the apron and feeds on the Raiders. Inside the ring, Lashleygets the tag from Styles but gets distracted. Drew takes advantage with a Claymore and that is it.

Also Read: Drew McIntyre’s record inside the WWE Hell in a Cell