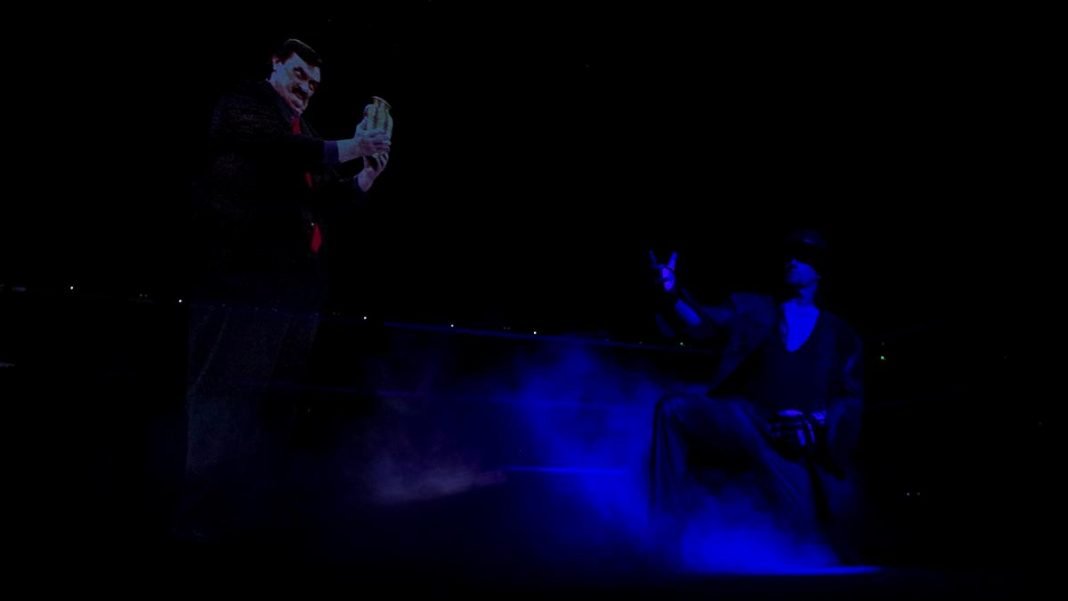 The show goes live with a big pyrotechnics display. This PPV is known for the WWE Brand Wars. But tonight is about The Undertaker’s Final Farewell.

AJ Styles claims to be the captain of the team. Team Raw comprsises of him, Riddle, Sheamus, Keith Lee and Braun Strowman. They are taking on Team Smackdown that consists of – Seth Rollins, King Corbin, Kevin Owens, Otis and Jey Uso.

After a brief argument AJ Styles starts against Jey Uso. They continue with their attacks and counter-attacks. Reigns and Heyman are watching from backstage. Sheamus and Seth Rollins tag in. Rollins shouts at his team and says “For the greater good”, as he drops down to his knees. He says Sheamus to do his part. Sheamus hits a Brogue Kick.

Team Raw is up 5-4. Team Smackdown is confronting Rollins for his decision to sacrifice himself. Strowman shoulder tackles their whole team down. Kevin Owens starts dominating as the action continues. He knocks Styles outside the ring, and hits Lee, Sheamus and Riddle with a Stunner each. Styles comes from behind and hits a Phenomenal Forearm.

Team Raw leads 5-3. Corbin comes in. Styles kicks him down and tags Riddle in. Riddle hits a Floating Bro to get the elimination.

Team Smackdown is trailing by 2-5. Otis and Strowman get in the ring. Otis hits a Caterpillar. He goes to climb the second rope but Strowman grabs him and hits a Running Powerslam.

Uso is the final member of Team Smackdown remaining. They are yet to score an elimination. Team Rae use some assistance from Styles’ bodyguard. Uso is distracted by him, as Lee catches Uso mid-air and hits a Spirit Bomb for the win.

This is a clean sweep for Team Raw. They emerge victorious with the score-line 5-0. Paul Heyman looks disgusted while the Team Raw is celebrating inside the ring.

Reigns is upset with Jey Uso. He says that he has no time for losers like him.

The Street Profits are backstage tslking about the legendary career of The Undertaker.  They want to start building a legacy of their own just like 30 years ago, Taker built his. The New Day come out to the ring, with Big E. Their costumes represent Gears of War.

There is predictable a lot of high-flying action involved in the match. Kingston and Ford ensure that there is enough aerial action. The Street Profits hit an electric chair/blockbuster combo for the win. Both the teams come out looking strong in the match.

Zayn is seemingly scared from Lashley. He keeps getting his head between the ropes to prevent Lashley from attacking him. But he continues to make excuses and even trash talk to other members of The Hurt Business who are present at the ringside.

Zayn is ready to leave the ring and give up on the match. But MVP isn’t allowing him to leave. He begs for disqualification. Lashley distracts the referee as MVP sends Zayn into the ring. Lashley applies The Hurt Lock for the win.

Both the wrestlers start brawling as soon as the match begins. The commentators are making it sound like a far bigger match than it actually is. They brawl outside the ring and are almost counted out. Both of them try to hit their signature moves. The Bank Statement and Asuka Lock, but the other has a nice counter for it. Asuka kicks her in the head and charges, but Banks counters it into a Cradle for the win.

Tag Team Champions Nia Jax and Shayna Baszler are representing Team Raw along with Peyton Royce, Lacey Evans and Lana. They are up against Bayley, Bianca Belair, Ruby Riott, Liv Morgan and Natalya. This match is unlike the Men’s elimination match. No team is completely dominating the game. This match is far more competitive than the previous match.

Royce and Bayley are the legal wrestlers inside the ring. Royce big boots her and hits a superplex on Bayley onto the other wrestlers. Bayley seems to miss everyone and hits the floor really hard. Royce gets her in the ring and hits a Déjà Vu.

Royce and Natalya continue. Natalya goes for an inverted surfboard but completely botches it. She stomps and applies a Sharpshooter for the submission.

The teams are at 4-4. Evans and Natalya are in the ring. Baszler interrupts and Natalya is distracted. Evans hits a Women’s Rights to get the elimination.

Riott and Baszler go back and forth with some interruption from Liv Morgan and Nia Jax. Baszler applies the Kirifuda Clutch and rolls Riott up. The referee is distracted. By the time the referee notices, Riott passes out.

Team Raw leads 4-2. Morgan and Evans are in the ring. Morgan stomps in and hits a crucifix bomb to get the elimination.

Jax gets in the ring. Morgan hits a knee, a DDT followed by an enzuigiri on Jax. But Jax gets up and hits a Samoan Drop to get the elimination.

3-1 advantage to Team Raw. Bianca Belair is the only member remaining from Smackdown. Belair and Baszler get in the ring. Baszler tries to apply the Kirifuda Clutch multiple times but finally gets one. Belair is able to get a rope break but Baszler does not let go. Belair passes out as the referee disqualifies Baszler.

Nia Jax clears the commentary table to hit a SAMOAN Drop but Belair gets out. Belair hits her with a back body drop into the barricades. They both get counted out.

Lana is the sole survivor in the match. As a result, she wins the match for Team Raw. Jax is angry as the referee holds her back.

The two wrestlers go face to face holding up their Championships. This is easily the best match match of the night. The match has numerous Spears, Claymore Kicks, Superman punches and Glasgow Kisses.

Reigns is hit with a Claymore Kick and he bumps into the referee. The referee is knocked out. Jey Uso runs down. McIntyre hits him off the apron. McIntyre goes to grab Reigns but the Universal Champion low blows him. Uso hits a superkick, Reigns follows with a Superman Punch. Reigns applies his new submission move, the guillotine choke.

McIntyre is fading away. New referee runs down to the ring. McIntyre collapses. The referee calls for the bell. Roman Reigns has won via a knockout.

Mike Rome announces this is The Undertaker’s Final Farewell. Many of Taker’s friends from the industry are here to witness this moment. Shane McMahon walks down the ring. He faced Taker at Wrestlemania 32 in a Hell in a Cell match. But they’ve been friends since the day Taker joined WWE (then WWF).

The Big Show comes out. Undertaker mentored Show when he came to WWF from WCW in 1999.

JBL is out next. He is introduced as a WWE Hall of Famer, even though he is yet to be inducted. A longtime friend and a memorable rival of Taker in 2004.

Jeff Hardy is out too. He had a classic ladder match with Taker in 2002. Taker decided to put him up in the match. That match established Hardy as a high-flying legendary superstar.

Mick Foley is the next participant in the ceremony. Foley was part of one of the most iconic match of the industry with Taker. He has wrestled Taker a lot, but no match can top their Hell in a Cell match at King of the Ring in 1998. They had one of the greatest rivalry in the history of the company. Additionally, Foley was also a part of one of Taker’s biggest storylines, when his manager Paul Bearer turned on him.

The Godfather, The Godwins, Savio Vega, Rikishi, Kevin Nash – all former wrestlers and dear friends of Taker walk out to attend this iconic ceremony.

Booker T is coming out too. When Taker resumed his Deadman gimmick, Booker T played an instrumental role in selling the gimmick. T had an important role in making the fans love the character of The Deadman.

The greatest rival of The Undertaker, Shawn Michaels, walks out. They had some iconic matches throughout their careers. In fact, it was Taker who retired Michaels at Wrestlemania 26.

The Nature Boy Ric Flair is out too. Flair considers Taker to be of tremendous support to him. It was Taker who restored his confidence back, after WCW broke him down.

The Game Triple H walks out. The duo have a series of iconic matches at Wrestlemania. Their Hell in a Cell match at Wrestlemania 28 is considered to be an all-time classic.

Kane walks out. He and Taker are considered to be storyline brothers. But what fans might not know is that the duo are great fans outside the ring too. The Brothers of Destruction were the team to beat throughout their time as a team.

WWE CEO and Chairman Vince McMahon comes out. He is standing in the middle of the ring. He recalls the three decades that Taker has spent with the company. Taker struck fear in the hearts of his opponents. He is one of the greatest entertainers for the company.

What Taker did can never be duplicated. McMahon is emotional. He says this is the time to say goodbye. People who say nothing last forever are wrong. McMahon says because the legacy of The Undertaker is eternal.

“So now I give you the Dead Man, the Phenom… ladies and gentlemen… THE UNDERTAKER!”

The bell tolls and the lights go out. Fireballs go up throughout the Thunderdome. The theme plays and for the final time the legendary Undertaker Mark Calaway makes his way to the ring in full costume. He does his iconic slow walk. He goes to the corner of the ring, as the platform raises him up. Taker raises his arm up as more fireballs go off.

“For 30 long years, I’ve made that slow walk to this ring and have laid people to rest time and time again. And now, my time has come. My time has come to let The Undertaker rest… in… peace.”

Crowd cheers have been added. Taker drops down to a knee. Paul Bearer’s, “OHHHH YESSS!!” is heard. A hologram of Paul Bearer holding the urn is shown. This is a tribute to the great William Moody.

Taker does his iconic throat slash taunt. Undertaker walks back to the ramp. He turn around and turns back again. He raises his arm up and closes the door on one of the most legendary career ever.