It has been stated in formula1news that Max Verstappen has made fun of the antics that Toto Wolff pulled during the Abu Dhabi Grand Prix of the 2021 Formula1 season.

Lewis Hamilton was on course to win his record-breaking eighth world title during the Abu Dhabi Grand Prix and it was only after Nicholas Latifi’s crash that Max was able to get back in the race. Moreover, Micheal Masi’s controversial decision-making helped Max Verstappen’s cause further and ultimately Max was able to snatch the world title away from Lewis Hamilton on the last lap of the race.

Reacting to Masi’s decision to allow the lapped cars between Hamilton and Verstappen to un-lap themselves, Wolff got on the radio to describe the move as “so not right” and exclaimed “No, Michael! No!”

Max made fun of Toto during a recent virtual event he was competing in.

When one of his teammates crashed out of the virtual race he jokingly said that he will complain to Masi. While talking about his teammate’s crash Max said “So instead of losing the spot [position], he just shunts you out of the way. I will report it to Michael Masi.”

He then mockingly shouted “No, Mikey! No!” as a reference to Wolff’s outburst in Abu Dhabi during the 2021 Formula1 season.

However, Max Verstappen has said that he would like Lewis Hamilton to continue in Formula1 and not retire because of the disappointment of last season. The first testing of the 2022 season is just a month away and it is expected that Lewis is going to make a final decision before that.

Also Read: Lewis Hamilton thinking about a new start in America as per Jacques Villeneuve 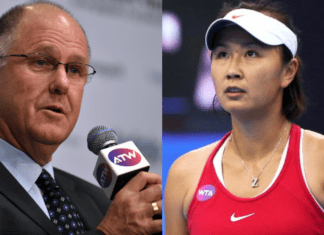