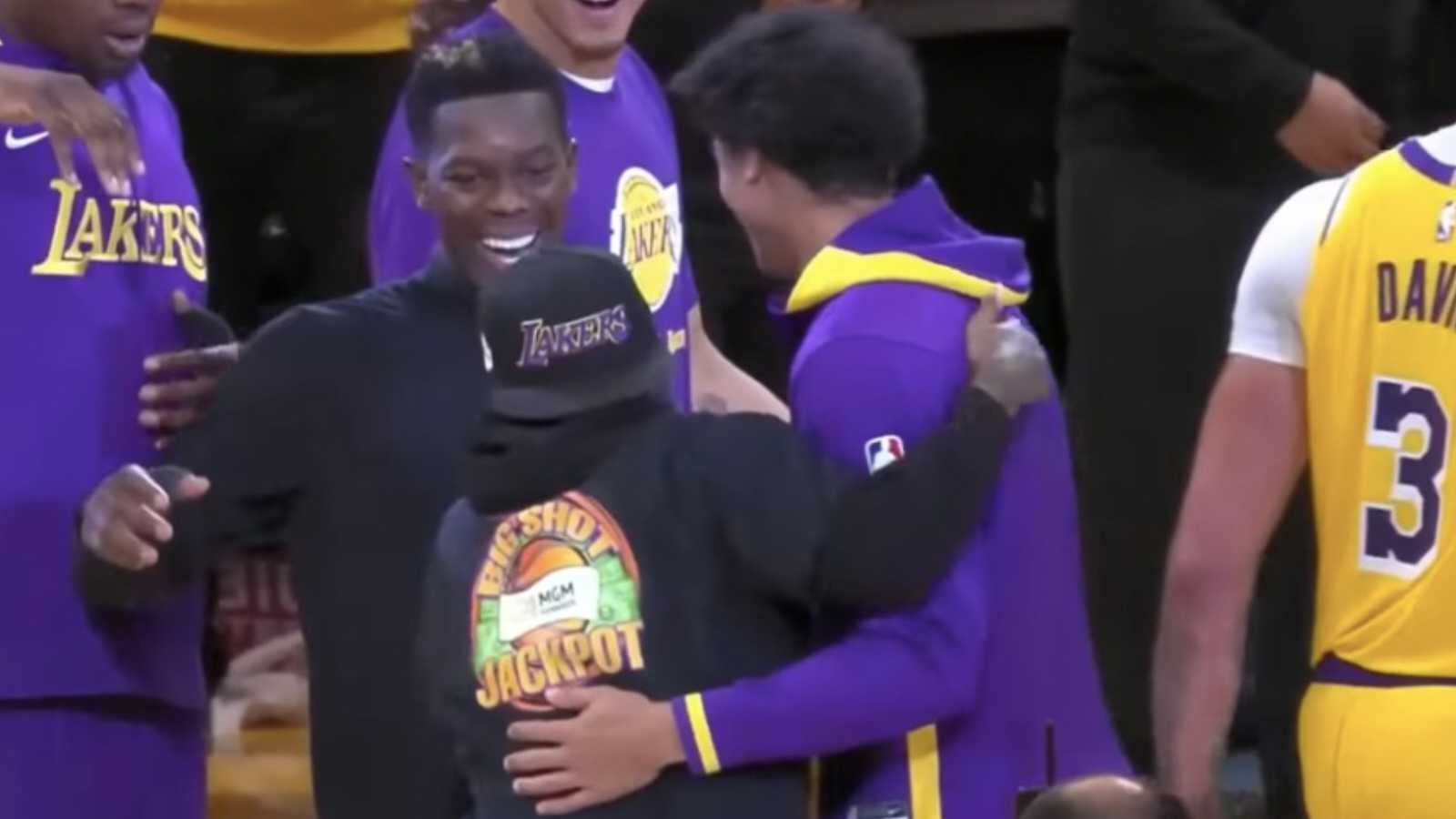 The Fan and The Laker Bench

The game between Los Angeles Lakers and the Indiana Pacers had players and fans all smiling after a fan hit the half-court shot. Giving kids and fans a chance to win prizes has become the staple of in-game entertainment for the fans. The Lakers fan hit an awkward half-court shot in the Crpto.com arena for $75,000 on his first attempt and he cashed out by drilling it down.

The joyful and stunning fan perhaps had the best day of his life. Not only did he win a heavy $75k amount, but also was greeted and congratulated by the Laker players. As he was celebrating, Anthony Davis came to congratulate him and the fan also got a big hug from the big man. As he ran along the Lakers bench he got congratulated by Dennis Schroder, J.T. Anderson, and Matt Ryan.

Also Read: “Toying with Raptors on and off the court” – Giannis Antetokounmpo casually plays with toy dinosaur during timeout in Dallas Mavericks game

It was a good night for the Lakers fans until Andrew Nembhard drilled game-winning three in front of LeBron James. The Los Angeles Lakers had as much as 17 point lead in the game, but as the lead grew the Lakers slept on the defense as the Pacers started to make baskets after baskets. The stinking defense from the Lakers was clearly visible as they felt comfortable in with the lead. LeBron James was often seen inactive on defense leaving the 3-point shots uncontested.

Most of the LA Laker players were in minus in plus/minus box. Anthony Davis had 25 points and 4 blocks in the game. Russell Westbrook had 24 points in 27 minutes and gave a much-needed boost to the Lakers offensively in 3rd quarter. LeBron James had an off-night as he shot only 8 of 22 shots from the field and scored 21 points for the Lakers.

Leading the Pacers was Tyrese Haliburton who scored crucial 24 points. Most of Haliburton’s points came when the Pacers needed the numbers most in the late 2nd quarter and early 3rd quarter of the game. Rookie Bennedict Mathurin, who had challenged James after being drafted by the Pacers also backed up Haliburton and contributed with 23 points. Six of the Pacers scored in double-digits as compared to 4 from the Lakers’ end, which also became a difference maker in the game aside from the bad defense from the team.

The Hollywood-based team had a perfect chance to improve their overall standing in the Western Conference and they casually blew the lead within the blink of an eye. The next few games for the Lakers are some tough battles and if they continue to hoop in this manner they may end up losing all of them. Especially, looking at the record in the Western Conference, the Los Angeles Lakers can’t afford to keep selling wins away.

Also Read: “WTF leaked out of him” Fans CREEPED OUT as Cedi Osman bleeds yellow after hard fall