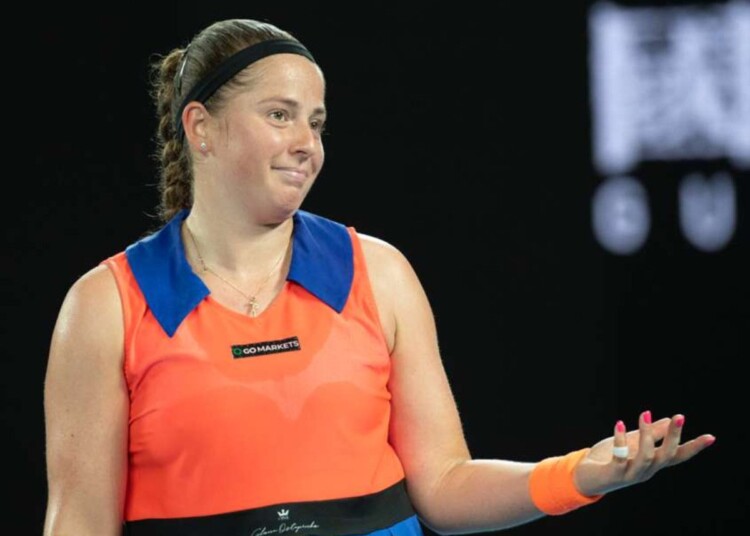 Latvian player Jelena Ostapenko expressed her frustration with the electronic line-calling system after her quarterfinals kids to Elena Rybakina at the 2023 Australian Open. The World No.17 said she doesn’t trust the system anymore after she saw it miss out on very clear calls. She also demanded the return of the Hawk-Eye system in conjunction with line umpires.

“I’m not really happy with the system they are using. But couple times it was really, like, not even by couple of centimeters. It was much more than that. But I cannot do anything about it, because it is the way as it is,” Ostapenko said. She had already complained about the system in the previous round. There was no relief for her in this match either.

She elaborated on the pain point. Ostapenko said, “Sometimes the system is not, how you say, not ignoring, but sometimes the calls are – first of all, they are really late sometimes. You already hit the ball, and then you hear “Out,” which is normally not the way it is with the line umpires. And second of all, some balls were quite, how you say, not a little out. They were a bit out and they were not called.”

She said that the Hawk-Eye system with the presence of line umpires on the court would be the best solution for players and the crowd. Ostapenko proposed, “Honestly, in my personal opinion, I wish it would be the Hawk-Eye system and the line umpires, because I feel like that way it’s more – precise? More precise and much less mistakes, in my opinion, my personal opinion.”

Ostapenko will rue the decisions that went against her. She lost in straight sets to Wimbledon winner Elena Rybakina. It still means that Ostapenko has reached the furthest round of a Grand Slam since 2018 when she reached the Wimbledon semifinals.

Related: Elena Rybakina talks about her serve as she reaches the Australian Open semis

Ostapenko was outplayed by the Kazak player throughout the match in Melbourne Park. But it still delivered entertainment as the duo are two of the biggest hitting players on tour.

Rybakina started quickly and took a 3-1 lead after breaking Ostapenko’s serve. A short break due to rain followed this. Ostapenko’s luck didn’t change after the restart. Rybakina took the first set 6-2. The second set started differently. The Latvian gained a 2-0 lead as she threatened to make this a long day. But Rybakina, who stunned World No.1 Iga Swiatek the previous round, showed herself to be a level above.

She forced a comeback and won the set 6-4 to end things. The handshake between the players afterwards could have been more comfortable with Ostapenko avoiding eye contact. It led to significant criticism of the player’s action. But her frustrations with the line-calling system and humiliating loss must have played on her mind.